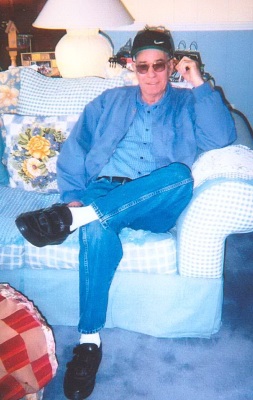 William Talmadge Mullis was born February 4, 1934 in Georgia to Hoke and Eva Mullis. He moved to Jacksonville, Florida and met his wonderful wife Jessie, who is affectionately know as Nana and they had four children. Papa and Nana lost their first born son Talmadge Jr., shortly after he was born. In 1962 Nana decided it was time to go west so they moved out here to Southern California.

Papa is the 4th child of 5 children and he had 2 brothers and 2 sisters. Papa has now joined his brothers Gerald and Milo in Heaven, where we are sure they are playing a round of golf together. He leaves two wonderful sisters Nita and Wylene in Jacksonville, Florida. His children Virginia, Diane and Mark. His grandchildren Tammy, Mark Jr., Daniel, Tawnia, William and Jennifer. His daughter-in-laws Rosie, Vanessa and his favorite son-in-law, Kenny. But his family legacy does not stop there.

As most of you know Papa and Nana have been taking care of children in foster care for the past 20 years and during that time they were blessed with two more very special sons, Juan and Patrick. The list of other young people who have been cared for by Nana and Papa is simply too long to mention here today but I can assure you that they have helped many more kids than most people!

To his own children Papa was an all American dad. He worked very hard, taught them things he knew about living life and fixing things around the house because he was a true handyman. He loved his family and they learned from his examples. Virginia can tell you many stories about growing up with Papa, as I’m sure Mark and Diane can as well.

But I can tell you first hand he taught her how to repair or fix just about anything! Some of her favorite memories were the times Papa world take her to the construction yard to do some work. She didn’t like it much when Diane and Mark go old enough to come along, but really enjoyed it when Papa placed her little brother and sister in the Bobcat bucket and raised it up in the air, which worked very effectively as a babysitter!

There are many more special time, like working on the car, teaching him to dance playing dice (Nan never knew about those father daughter dice games). But of course most of all, Virginia will always remember how much he loved them and took care of his family.

All of his grandchildren have their own special memories as well. Hid granddaughter Tammy was raised near him in most of her younger years. She too learned Papa’s tricks of trade. Tammy returned home this year to be near her Papa, help Nana and spend some very special time with him. It has been wonderful watching them together these last few months.

He enjoyed talking with and seeing each of his grandchildren. He talked of them often. How proud he was of Mark Jr. and Daniel. He was exceptionally tickled with Tawnia. He enjoyed having the twins Will and Jenny back in his life too. He was very proud of Will joining the military but also concerned for his safety. He was very excited about Will’s “bride to be” Heather. As Papa put it, “Will finally got a good one”! He was also very proud of Juan and Patrick who I know he enjoyed coaching them in baseball and felt like both turned out to be fine young men.

Papa was diagnosed with Alzheimer’s in 2001 and for the next year or so he would question us when he over heard us talking about the doctor appointments, or his illness and sometimes he would get a little upset.

He was pretty set in his routine and throughout the day he would retreat to the backyard to enjoy his bougainvillea tree of bright pink flowers as he smoked a cigarette. Sometimes he would just sit there and stare at the flowers. One particular day Papa came into the house, and Nana asked him, “Bill what’s wrong”, then he looked at her and said I have Alzheimer’s. She replied, yes, I know. He then explained to Nana that God had told him he was ill with Alzheimer’s and that he was okay with it. As Papa would say “you just have to accept the cards you’re dealt”.

And that he did, with the same way he lived most of his life, with grace and love for his family.

For me personally Papa was much more than a father-in-law. He was a very dear friend who talked open and candidly about everything with me. He told me countless stories of his younger days and I can assure you that Bill Mullis was a very tough man. He stood up for what he believed and he backed it up with everything he had. This I am sure of. The two women he loved most in his life were Nana and his Aunt Nita who really loved Bill and took care of him like he was her own son. He spent most of his working years outside in all kinds of weather operating heavy machinery. He was well known as one of the fastest and most efficient back hoe operators around and he took great pride in his proficiency and skill. He loved to hunt as a young man and he laughingly told me the story of the bear he killed and then had to drag that heavy hairy thing up the side of the hill just to get it to the roadside. I’m sure he wasn’t laughing about it at the time but he found it very funny when looking back at it. Yes he did have a great sense of humor! And he loved to mess with you. I think he looked forward to our visits just so he could mess with me. But it was fine with me. Like he always said, if I didn’t mess with you, it would mean I don’t like you. Of course I knew that and so I just messed with him back. So we would sit side by side for hours watching TV and talking trash to each other. He was a Kobe Bryant guy and I was a Shaq and Michael Jordan guy, he loved Phil Michelson and I love Tiger Woods, he thought Jimmy Johnson was the best NFL coach and I hated Jimmy Johnson, he loved Clinton and I love Bush, he liked UCLA and the Florida Gators while I of course am a USC Trojan. Well I think you get the picture. I certainly enjoyed those many hours of debate and trash talking with him. In so many ways he will be greatly missed but today I want to celebrate his life and all that he did for so many of us.

As we share these memories of Papa and our family’s faith in our Lord Jesus Christ today we especially want you to remember this: even though we are not a family with lots of money, we feel we are very rich to have had the many blessings God had given us.

Papa until we meet again enjoy your heavenly family.