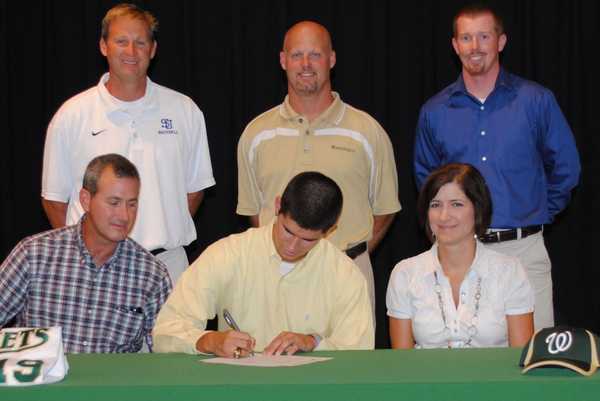 Patience paid off for Westfield graduate Josh Mullis. The GISA all-region performer accepted a scholarship offer Aug. 10 to play baseball and continue his education at Shorter College in Rome.

“I was looking for a college to go play,” Mullis said, “but I didn’t get many offers or looks during the season.”

What Mullis did have was a growing reputation amongst his teammates and coaches as a clutch performer. After all, it was Mullis who secured the final out in the Hornets’ state title clinching win over Deerfield-Windsor — pitcher unassisted.

“Josh was fearless all year,” Westfield head coach Rob Fitzpatrick said. “I put him into some extremely difficult situations on the mound this year and he responded every time. He also played a great centerfield and will be difficult to replace.

“It’s nice to see a player work as hard as Josh and then get rewarded with a college scholarship,” he said.

Westfield assistant coach and Shorter graduate Jarrod Lewis helped Mullis get a tryout with Shorter head coach Matt Larry. Mullis was scheduled to move into his Rome digs on Aug. 13. The oldest of three boys born to Jackie and Debbie Mullis, he is also the first to leave home.

“They seem to be handling it good,” Mullis said of his parents, “and I haven’t noticed that I’m leaving yet, so I guess I’m handling it pretty good, too.”

Mullis said he is undecided on a field of study.

During Westfield’s championship season, Mullis hit .297 and drove in 22 runs. On the mound, Mullis appeared mostly in relief, yet still recorded a record of 7-0 with an ERA of 3.06. He struck out 37 batters in just over 34 innings.

In addition to his parents and coaches, Mullis thanked his younger brothers for providing motivation and inspiration.