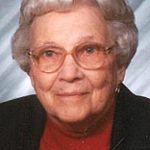 MARSHALL – A memorial service for Valora Olsen, 93, of Marshall will be held at a later date.

She was born March 4, 1918, in Lyon County to Clarence and Junia (Mullis) Giles. She lived in the country near Balaton. She received her education in country schools, Balaton Public and Marshall Public Schools. On Oct. 5, 1935, she was united in marriage to Kenneth Olsen. They made their home in Balaton, Tracy and Marshall.

Valora was a “stay-at-home mom” until the late ’50s. She worked for Carrow’s Cleaners and S&L Department Store, then with her husband in their shoe repair business until they retired.

She was an active member of Christ United Presbyterian Church serving as a church school teacher, the Presbyterian Women’s Organization, a circle chairperson and bazaar committee chairperson.

She was preceded in death by her parents, husband, son Jerry, three sisters and one brother.