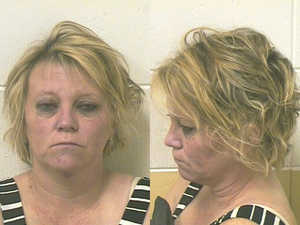 BYRON — A Byron woman faces aggravated assault, drunken driving and other charges after she allegedly tried to run over her ex-boyfriend early this morning and crashed into the patrol car of a Houston County deputy who was responding to the 911 call, authorities said.

Angela Gail Pollock, 41, was charged with aggravated assault with a motor vehicle, aggravated assault against a police officer, terroristic threats for allegedly threatening to kill law enforcement officers, criminal damage to property, leaving the scene of an accident and other charges, said Houston County sheriff’s Sgt. Al Elvins. Those charges are in relation to the incident with the ex-boyfriend, Elvins said.

Pollock, who was taken to Houston Medical Center to be checked out and was released, was being held this afternoon in the Houston County jail without bond, Elvins said.

Here’s what happened, according to an incident report in the case:

Mitchelson was responding to the domestic call about 3:42 a.m. on Ticonderoga Drive near Byron when he was struck by a 1996 Honda Civic driven by Pollock.

Her ex-boyfriend, Donald Mullis, 55, told authorities that while he was trying to load two suitcases of Pollock’s belongings into her car, she tried to back up and run over him.

Pollock then chased Mullis through the backyard of his home with her car. When Pollock drove back around to the front yard, she stuck a transformer, a neighbor’s home and her ex-boyfriend’s mailbox.

She then tried to run over Mullis a second time, who retreated to a back porch for safety. Pollock then drove her car through an above-ground, inflatable pool in the backyard.

She crashed into the deputy’s police car on Liberty Lane as she was trying to flee the scene.