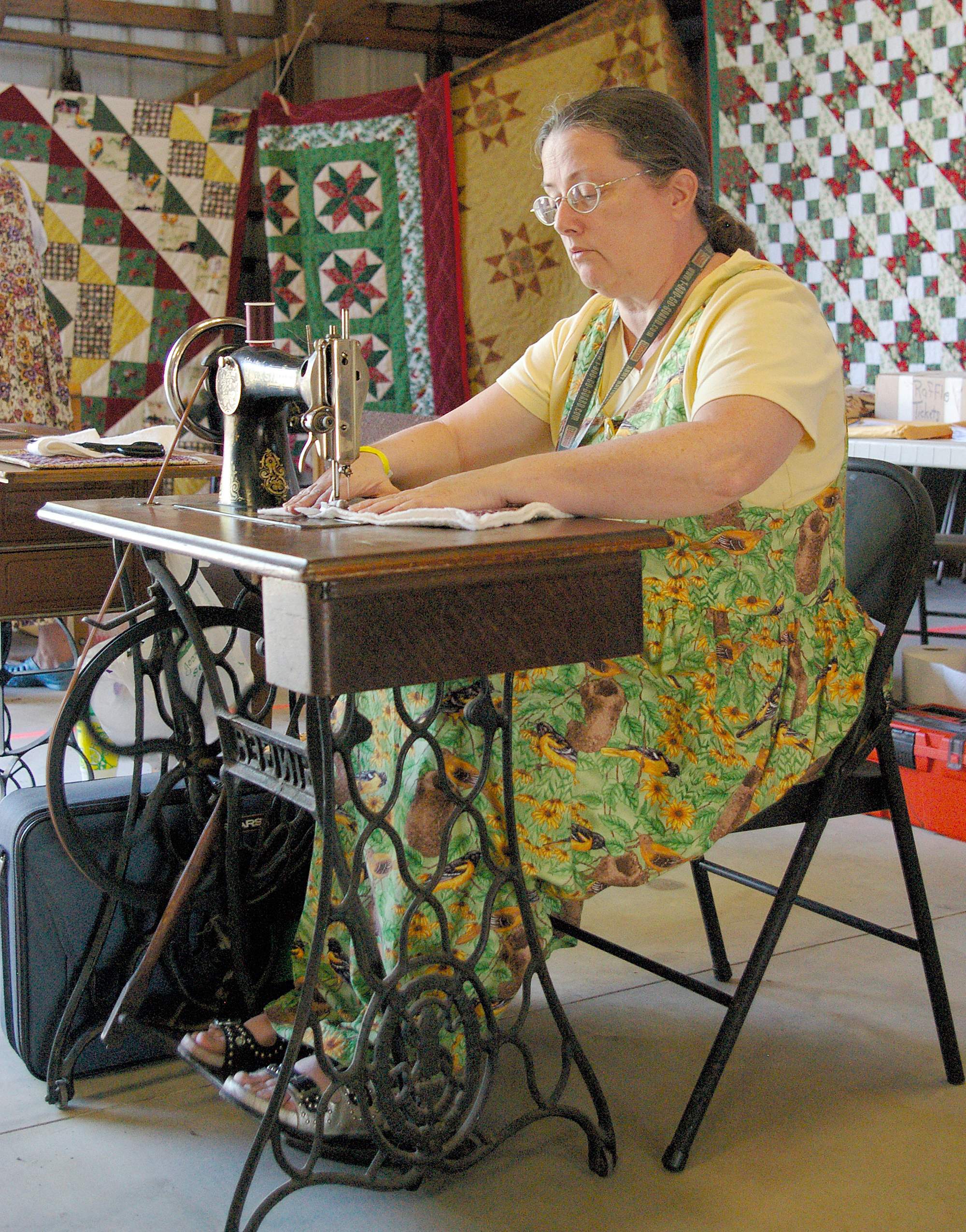 “We want them to experience and see the old equipment,” said Huss, who’s from Lincolnton. “Without our guidance this history would be lost.”

For Huss’ granddaughter, Kristin Huss, it was refreshing to see the equipment she had grown up around, but hadn’t necessarily seen put to use. She was joined by her two younger sisters, Candice, 11, and Cheyenne,7, who clung to her hand.

“It’s amazing because you grow up with this old stuff around you and now I get to see it being put to use,” said the 14-year-old while the music from a bluegrass band played behind her. “I like being able to learn about the equipment and understand it without it being gone.”

The Threshers’ Reunion idea was born in 1970 after Brown Loflin, owner of the park, and Howard Latham began giving visitors airplane rides as a means to raise funds for the local rescue squad. It had since transformed to one of the largest steam and gas engine and antique farm equipment shows in the South.

The staff expects to see more than 60,000 visitors walk through their gates this week.

This year about 700 tractors and 510 steam and gas engines lined the grassy grounds of the Denton FarmPark. Some were red, green, rusting or pink, with their owners standing proudly beside them.

Every year Guy Beaber, 64, of Salisbury, enjoys seeing new and old faces at the Threshers’ Reunion. He not only displays his tractors but also sells parts. His pride and joy this year is an Allis-Chamber 1949 WF tractor, which he claimed was the only one in the park.

Antique farming equipment may be the focus of the event, but it’s far from being the only piece of history.

Tucked inside an old airplane hanger, Susan Mullis is surrounded by quilts, garments and antique sewing machines. By day she’s a production planner for Turbomeca, but her passion lies in sewing.

Mullis always loved sewing, but had to put the needle down while she raised her kids. Years later she bought an old Singer 319 for $25 at a yard sale, beginning her collection. She jokes that ever since then sewing machines have been following her.

“One day I got home and there were two sewing machines left up front,” she recalled while pumping her feet to the rhythm of the machine as it stitched together a piece of quilt.

“It’s the same philosophy as restoring the tractors, so you can see the quality manufacturing of what American once was.”

Off to the side of the Threshers’ Reunion, past the power sharp saws cutting cedar shingles and beside the campers hailing from Virginia, South Carolina and Wyoming, stood Randy Tucker, who has yet to miss a reunion in his 39 years.

“My father brought me when I was a baby and I’ve been coming ever since,” Tucker said, showing off his regular- and scale-sized engines that he built, some from scratch. “I just enjoy building them because you take something that’s 70 to 80 years old, get the parts, clean it, fix it and you get a great sense of accomplishment.”

His wife, Kim Tucker, 43, said her husband will spend hours working on his engines, but she doesn’t mind as he could be “drinking at a bar and chasing wild women.”

To which a passerby yelled “you’re his wild woman,” garnering laughter from the Tuckers.

It’s also the third year the 40-foot and 250,000-pound cotton press from Charlotte has been operational at the Threshers’ Reunion. Used during the 1800s, it’s capable of compressing a bale of cotton to eight inches to make room for more as it was being transported on a railroad car.

The Reid plantation, equipped with a main house, blacksmith shop, slave house and cotton gin, has a new addition, a garden containing herbs and vegetables typical of a garden in the 1800s, such as West Indian gherkin, Black Aztec sweet corn and Oxhart carrots.

Karen Miller, daughter of founder Brown Loflin, started helping her parents at the event by running the register at the General Store with her brother, Keith Loflin. They are now both managers of the Denton FarmPark. Her daughter now mans the register.

“The (Threshers’ Reunion) helps people realize how important our heritage is. Some people aren’t familiar with the equipment and it lets them go back to our agricultural roots,” Miller said.

“A lot of kids come with their grandparents because they want them to see what they grew up with.”

Ann Huss hopes that when her granddaughters go home they will treasure the memories they made on their first trip to the Threshers’ Reunion.

“We have lost a lot of our history,” Huss said. “This country was founded on farming and we forget that sometimes.”