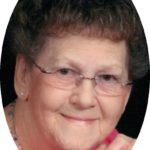 Shirley Cox, 77, of Sullivan, IN, went home to be with the Lord on December 31, 2011, at 6:17p.m. in Sullivan County Community Hospital . She was born in Linton, IN, on December 17, 1934, to Jake Jarmon and Tillie Mullis Jarmon . Shirley was a 1954 graduate of Linton Stockton High School and was the Sullivan County Humane Officer for 30 Years, and a member of the First Christian Church. She was a homemaker, who had a great love for her family and animals which she dedicated her life in helping stray and unwanted animals find good homes.

Services for Shirley will be at the Holmes Memorial Chapel on Wednesday January 4, 2012, at 11:00 a.m. with Rev. Dale Wise officiating. Visitation will be on Tuesday from 4 to 8p.m. Burial will take place at Center Ridge Cemetery in Sullivan. The family suggests that in lieu of flowers donations in memory of Shirley may be made to the Sullivan County Humane Shelter. Envelopes will be available at the Funeral Home. Online condolences may be made at Holmesmemorialchapel.com.