Posted with permission from Peggy Sue McRae the daughter of
Florence May Mullis McRae. This was found on her web blog On San Juan Island.

Yesterday I sat down with a group of local historians to work on an
exhibit for the upcoming San Juan County Fair that will introduce
the Town of Friday Harbor’s upcoming centennial celebration. We
looked at some great photos owned by the Historical Museum of
Friday Harbor’s early years. What was needed were photos of our
more recent past, mid to late 20th century. 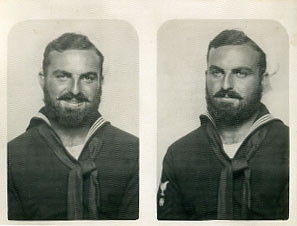 I brought in a few family photos. Here are two Island men who
joined the US Navy in the 1940s after Pearl Harbor, my dad, Jim
McRae and my uncle Wally Mullis. By the swarthy looks of my dad
I’d guess he had already seen the other side of the equator when
this photo was taken. He served as a radar man in the South
Pacific. 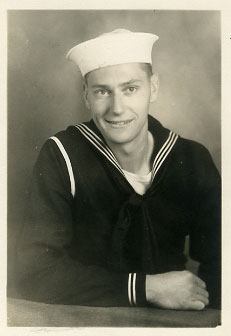