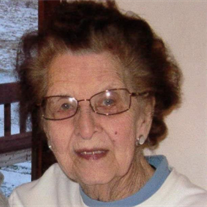 Rose Mary (Petrick) McEvoy Mullis, a resident of Willow Gardens in Marion, formerly of Central City passed away at Willow Gardens on Thursday, March 17, 2016. A Scripture Service will be held at 3:30 p.m., Sunday, March 20, 2016, at Murdoch Funeral Home & Cremation Service, Central City, with the family greeting friends from 4:00 p.m. to 7:00 p.m. Funeral Mass will be at 10:30 a.m., Monday, March 21, 2016, at the St. Stephen Catholic Church, Central City. Burial will be at St. Joseph Catholic Cemetery, Prairieburg.

Rose was born June 2, 1920, the daughter of Joseph and Anna (Lawrence) Petrick Sr. near Prairieburg. She attended school in a one room country school. She learned to can, cook, bake and sew at an early age. She was married to Gerald McEvoy for over 40 years, farming side by side on their farm northwest of Prairieburg. They moved to Central City in 1979. This marriage was blessed with one daughter, JoAnn. Gerald died December 24, 1983. Several years later Rose met George Mullis at Senior Dining in Central City. They were married October 28, 1989. George died December 30, 2012.

Rose earned many ribbons at fairs for her sewing talent. She was very well known for her delicious kolaches. Family and friends received trays of kolaches on many occasions, especially birthdays and Christmas. She knew everyone’s favorite. When you stopped to visit, you were always offered a cup of coffee, a kolache or whatever tasty treat she had made. Rose loved dancing, playing pinochle and 500, the Cubs and Hawkeyes, and caring for her flowers. She was a member of St. Stephen Catholic Church.

A very heartfelt thank you to Unity Point Hospice and to all the staff and residents at Willow Gardens for their care and love.