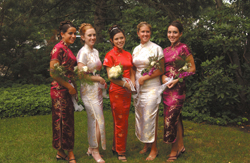 Bright, bold colored clothing made of silk or exquisite materials detailed with fine embroidery work is how some people would describe ethnic clothing.

Many people have taken an interest in traditional clothing of exotic countries they visit. Some have gone so far as to purchase a set for themselves because they like it.

“Traditional clothing represents not only a history of the people who wear it, but shows an evolution of thought, lifestyle and beliefs as well as fashion,” said Julie Damron, a professor teaching Korean.

She said she likes the way other countries use different colors together and also the attention paid to detail and the handiwork.

“For me, it wasn’t because I wanted a souvenir to hang on my wall,” Damron said. “Wearing a hanbok at appropriate times made me feel less like an outsider and more comfortable in that culture.”

Some people have found themselves picking up historical information about a culture simply by asking questions about a country’s national costume. For individuals who are not big fans of history lectures, fashion can help bring the past to life.

A cheongsam, a dress sometimes known as the qipao, dates back to the Qing Dynasty when the Manchurians ruled China. It was originally loose and wide but has been modified since the 1900s to become a form-fitting dress.

Melanie Mullis, a BYU alumna from Rhode Island, describes it as a high-collared, patterned dress, typically a long one, with two slits on the sides. She said it usually comes in red but can be found in all sorts of color ranging from light purple to jade green.

Chinese people wear the cheongsam on occasions such as the Chinese New Year or during weddings.

“I had my wedding dress for outside the temple and for my reception I changed into my Chinese dress,” Mullis said. “I wanted to bring a little Asian aspect into my wedding; I wanted something to show my heritage.”

The cheongsam is a representation of the Chinese culture and as such is often worn by beauty contestants for pageants as well as flight attendants of the Chinese airline companies.

Besides changing the fit of the cheongsam, people have in recent years become modernized in the way they wear the traditional dress. Some of the younger generations wear a cheongsam-style top paired with jeans or pants to create a more casual look that can be worn on all occasions.

“People have become creative with the cheongsam, for example, in their use of material,” said Belinda Wong, a junior from Hong Kong. “I’ve seen gold-colored cheongsams and even fully-beaded cheongsams. They also vary the length of sleeves or the length of the hem.”

Cheongsams are characterized by their high slits coming up to mid-thigh that enable ease of movement to counter its fit. To ensure modesty, Latter-day Saint women often add extra fabric such that the dress is not as tight, which leaves room for movement when sewing the slits down to the knees, Mullis said.

The men wear the changshan, the male equivalent of the women’s qipao.

For the people of India or Pakistan, the men and women have a variety of traditional clothing. The men wear the sherwani or kurta while the women wear the sari, salwar karmeez or lehengas.

The key to knowing which one to wear is the occasion.

“A proper dress code marks the occasion as a special one,” said Satyan Chandra, president of Club India, a club on campus. “Each dress goes with a ‘how formal is the program’ tag on it and accordingly, the dress is chosen.”

Women regularly wear the sari or salwar-kameez while the lehengas is a refined form of salwar-kameez worn only during precious occasions, Chandra said.

A sari is a strip of cloth, available in a variety of colors, embellished with small jewels or gold patterns that catches your eye in the distance. It is draped over the body in different styles but most commonly wrapped around the waist, with one end draped over the shoulder baring the midriff. The sari is usually worn over a petticoat and a short, cropped blouse called the choli or ravika makes up the upper part of the garment.

A salwar-kameez consists of an elongated top shirt with embroidery work and jewelry, and a loose bottom very much like pajama pants.

“I am a big fan of Indian clothing … because of the variety, the change, the color, the brightness and the message it conveys: joy, happiness and celebration,” Chandra said. “There isn’t any need for an occasion to make you feel happy; a set of Indian clothing shall do the job.”

With the various outfits clearly defined for specific purposes, about 75 percent of India still wears their traditional clothing on a daily basis.

“It is a representation of the country or a symbol of love and affection,” Chandra said. “Tradition and culture would not be called so if it kept changing to the developments of the world.”