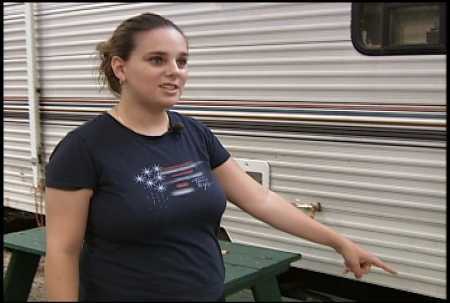 The 22-year-old mother of two was talking with her husband, Marcus Mullis, 26, when a large red fox sprang from the nearby woods and lunged toward the couple and their 16-month-old son, Uriah.

“All I could think about was protecting my baby,” she said Wednesday. “There was so much fear, but my child was my first thought.”

The family was attacked by a fox around 5 p.m. Saturday near the Hidden Valley Campground on Cortez Boulevard in Brooksville. They were two of four people whom Hernando County health officials believe were attacked by the animal that day.

The fox went for Marcus Mullis first, his wife said, sinking its teeth into both of his ankles. She grabbed her child and ran inside, then returned to help her husband fend off the snarling creature.

“I was scared for his life,” Stephanie Mullis said.

The animal went for her next, also biting both of her legs.

Marcus Mullis then grabbed his son’s plastic toy lawn mower and used it to beat the fox to death.

The two, shaken by the five-minute ordeal, grabbed the dead creature and rushed to Brooksville Regional Hospital to seek medical treatment.

The state Department of Health’s Tampa Branch Laboratory tested the fox for rabies, and the results came back positive.

On Saturday, two other people were attacked, according to Ann-Gayl Ellis, the public information officer for the Hernando County Health Department. “Altogether, four people were bitten in three separate attacks,” she said.

Stephanie and Marcus Mullis will begin treatment Friday with the first of four shots given to each rabies victim over a two-week period.

One of the other unidentified victims was treated in Hillsborough County, while the other is expected to begin rabies treatment in Missouri, Ellis said.

“Wild animal attacks are not that uncommon,” said Albert Gray, environmental manager for the Hernando County Health Department. “Usually we encounter raccoons, but foxes are just as likely to bite.”

Last year, a rabid cat bit a 12-year-old boy near Deltona Boulevard and Abeline Road in Hernando. In 2005, a 49-year-old Brooksville man was attacked by a rabid raccoon.