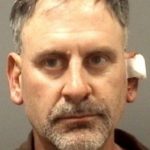 SALISBURY — A Richfield man was arrested Thursday after officers said he attempted to kill a bartender with a box cutter.

According to Salisbury Police, 48-year-old Jeffrey Lynn Mullis approached Benchwarmer’s bartender Doug Lyerly as he was exiting the pub’s bathroom.

Mullis began threatening Lyerly, the report said, and as Lyerly attempted to go around Mullis, Lyerly realized Mullis had cut him in the leg with a blue box cutter.

The bartender asked Mullis to leave, and followed him outside to make sure he did not try to re-enter the 113 E. Fisher St. business through the back door.

Police said Mullis turned around and confronted Lyerly, again pulled out the box cutter and attempted to cut him.

Lyerly punched Mullis in the side of the ear, an arrest report said, and the 48-year-old immediately left on foot. Officers found Mullis a few blocks away.

Mullis, of 317 E. Church St., Richfield, was taken to Rowan Regional Medical Center and was treated for a cut to his ear. He received five stitches.

He was charged with felony assault with a deadly weapon with intent to kill inflicting serious injury. He also had outstanding warrants in Chatham County on charges of harassing phone calls and cyberstalking.