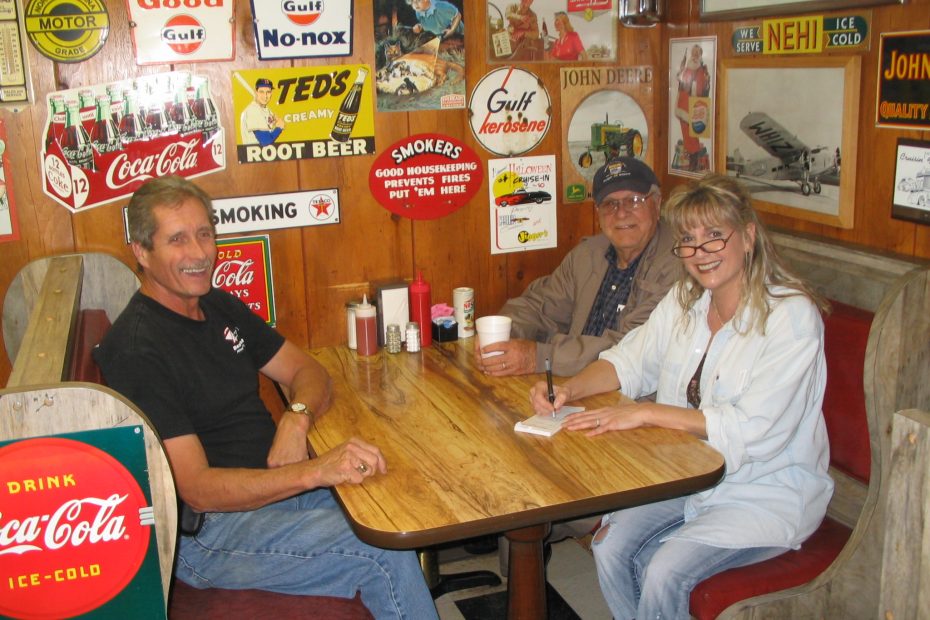 Napoleon said Time revered the pyramids of Egypt because they seemed to have been around forever. Well, people in Mint Hill might say the same thing about Penny’s Place restaurant.

Founded in 1936 by the late Harold Mullis and celebrating its 75th anniversary, the eatery is still firmly rooted at its original location in Mint Hill. Bill Kiser, the current owner, has been married to Shirley, one Mullis’ three daughters, for 40 years. Kiser grew up in Wilson Grove, about a mile from Mint Hill, and worked in construction before taking over his father-in-law’s business.

Many people probably wonder how the restaurant came to be known as “Penny’s Place.”

“Harold told me before he passed away that when he was a child, the milkman would sometimes give him a penny,” Kiser said. “It was the milkman who gave him the nickname of Penny.” 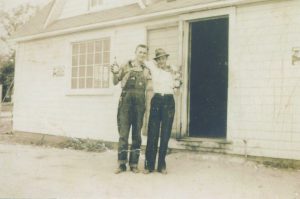 “The original 1936 building was a wooden structure,” Kiser said. “The current building is 60 years old, but in 1979, it was completely remodeled.”

The ambience at Penny’s Place has evolved over the past 7 1/2 decades. Originally, it was basically a pool hall and place where mostly guys gathered for food and drinks. The current building incorporates a nostalgic element from those early days – the original
bar.

“You could get a hot dog or hamburger and a beer,” Kiser said. 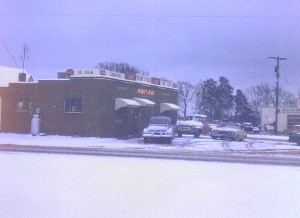 Penny’s, seen here after moving into its second building in 1963. (Courtesy of Bill Kiser)

Hot dogs and hamburgers are still on the menu at Penny’s, but the beer is long gone.

Kiser also keeps a culinary holdover from the past. “We still use the original chili recipe on the hot dogs,” he said.

Penny’s is more than a place to chow down. As it has been since the days when Franklin Delano Roosevelt was president, Penny’s is a spot in Mint Hill where the intelligentsia gather to chew the proverbial fat. 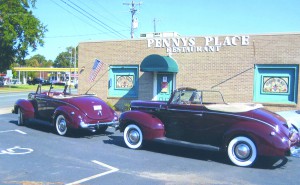 Penny’s, remodeled in 1979, giving it a new color brick. (Courtesy of Bill Kiser)

Bob Long served as mayor of Mint Hill from 1971 to 1975 and remains a regular at Penny’s, where he often joins friends at what they call the “Power Table.”

“I’ve seen Penny’s change from a hangout to a place where a person can acquire knowledge,” Long said. “But don’t ask me to define what knowledge is. Penny’s also provides a place for fellowship, and fellowship is good therapy. We share fun and sorrow.”

Adding to the down-home flavor of Penny’s Place, the interior is a treasure trove of memorabilia, ranging from a huge poster of Marilyn Monroe to a 1932 Popeye the Sailor magnet game board.

“Buck would stop in on Saturday mornings for breakfast as he was heading to his driving school in Rockingham,” Kiser said.

One of the neatest bits of nostalgia at Penny’s runs circles around the customers – an elevated, 1949 model Lionel train.

“We have people bring their kids here just to see the train run,” Kiser said.

Penny’s Place still has the soul of its early days but has refined its image to reflect the transformation of Mint Hill from rural to suburban.

“Women thought this was a man’s place,” Kiser said. “Now they know otherwise. We have ladies’ groups come in a lot. We also serve a lot of families, especially breakfast on Saturday mornings. We also went smoke-free in 2005.”

Even so, Penny’s Place holds firm to its most important tradition. “It’s just been an old, country restaurant,” Kiser said.