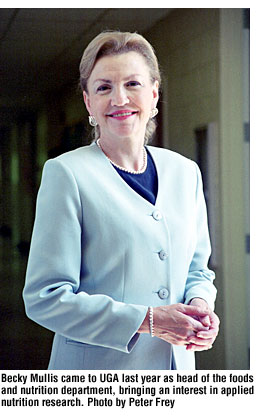 Rebecca Mullis’s laboratory in the foods and nutrition department of the College of Family and Consumer Sciences is a bit different than that used by most nutrition researchers.

Rather than waist-high lab benches, sinks and tile floors, Mullis’s lab features tables and chairs, computers and carpeting.
The difference reflects Mullis’s emphasis on applied nutrition research, a difference that foods and nutrition faculty members were seeking when they offered her the department head position a year ago.

“I really thought this department was so basic that it would be a bad fit,” Mullis says, pointing out that the department has traditionally focused on basic research in areas such as obesity and diabetes.

ullis was reassured, however, by faculty members’ insistence that they wanted to enhance the applied aspects of their department.

One of her current projects explores ways to encourage more heart-attack victims to participate in educational programs at Grady Hospital.
“When we first started this project, we thought we’d be re-writing the curriculum to make it easier for patients to understand,” Mullis says. “Instead, once we talked to people who had participated in the programs–after their second heart attack–we began to find out why they were initially reluctant to go to the classes. Their reasons included being afraid they wouldn’t understand the content, believing they could make the necessary changes without additional education and support, and not remembering their doctor had recommended they go.”

Most importantly, Mullis discovered that the former patients wished they could have talked with someone like themselves about the classes.

“We developed a pilot study that involved six ‘Heart Buddies,’” she explains. “They are all older African Americans who have survived a heart attack and are now successfully complying with diet and exercise recommendations. They’re responsible for visiting with patients who have had a heart attack and telling them about the classes Grady offers.”

Based on the success of the pilot study, Mullis now is seeking funding from the National Institutes of Health for a more comprehensive project.
In another study, Mullis has worked with Barrow County officials to incorporate health and nutrition education into county services.

“In most communities, health information is generally located at the county health department,” she says. “The idea behind this project is to broaden the community focus on health by involving staff members at other agencies, such as those at the Department of Family and Children Services or the public housing offices. These people, in turn, will educate the clients they come in contact with–such as people signing up for food stamps–as well as directing them to the health department and extension programs for additional information. We also are working with grocery stores to help people focus on identifying healthy items at the point of purchase.”
Mullis also thrives on her opportunities to teach.

"I’m an educator at heart,” she says. “I love working with the students, whether they’re undergraduates or graduate students.”