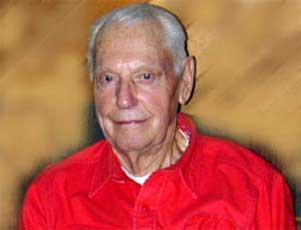 Wally Mullis passed away on March 24, 2007. He was active to the day
of his passing. Wally was a true native San Juan Islander. After
graduating from Friday Harbor High School – class of 1938, he attended
technical school in Bellingham where he learned diesel mechanics – an
occupation he followed for many years.

He met and married Vivian Wade Brietzkreitz, and they settled in a
little cottage overlooking Jensen Shipyard. He was a PT boat engineer
in the navy during World War II. After returning from the war, he moved
his family to Bellingham where he worked in the shipyards.

They moved to Mt. Vernon in the 50s, where he was employed by
Columbia Valley Lumber Company. His second son Jerry was born there in
1954.

Around 1958 Wally headed north to Alaska for a career in the seafood
industry. He was a foreman in canneries on Kodiak Island and various
mainland sites. Among the many stories he had to tell his friends was
being an eyewitness to the devastating Alaska earthquake/tsunami of
1964.

Wally played an active role in rebuilding the canneries after that
event. He was also a pioneer in the new king-crab industry that started
in the 1960s.

He returned home to Friday Harbor for retirement in 1985. Wally’s wife Vivian passed away on the island in 1989.

He married Evelyn Davis, an island resident. Evelyn passed on in 2001.

A few years ago Wally married Giovanna Bianca Kirby. "GB" has the
gratitude of the family for her devotion to Wally during these past few
years.

Wally’s ancestral roots go deep in island history. His grandfather
George Mullis was one of the islands earliest white settlers. George
was a master carpenter, and passed down his skills and business to
Wally’s dad, Frank H. Mullis. Frank was a well-know island builder and
contractor from the 20s through the 50s.

Frank was the one-time proprietor of Davis Lumber Company, now known
as Browne’s Lumber. The family’s home on Argyle Street, where Wally
grew up, is still called the ‘old Mullis house’. The field just behind
the former location of the Mullis workshop is now the location of the
Mullis Community Senior Center, a gift to the community by Wally’s
brother Don.

Wally was a modest man who did not want a formal memorial service. An
informal remembrance luncheon hosted by Wally’s family at the Senior
Center is planned for April 16th starting at noon.

Instead of flowers the family asks donations be made to the Mullis Community Senior Center or charity of your choice.

He will be remembered and loved by many islanders as well as his
two sons and their families, his grandchildren, and an extended family.