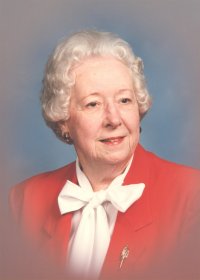 Mimi was born in Morganton on Feb. 22, 1908, a daughter of the late John Hampton Mullis and Martha Alice Hendrix Mullis. Mimi graduated from Meredith College in 1929 with a BA degree in education. She also received her Public School Librarian Certificate from Appalachian State University. She was a graduate student of the Institute of Children’s Literature, enabling her to write children’s stories.

She served as a teacher and librarian in the local school systems for a period spanning 40 years. She held many offices in the North Carolina Association of Educators. Mimi was a member and past president of Delta Kappa Gamma.

She was a life-long member of the First Baptist Church and sang in the chancel choir for many years. She devoted many years to music, working with the children’s choir and as a pianist for many church classes and events. She was a charter member and past president of the local Pilot Club, and served as district governor, director, and historian of the Pilot Club’s N.C. District. She was an active member of The Friday Afternoon Book Club of Morganton.

In addition to her parents, she was preceded in death by a brother, Willard R. “Jake” Mullis; and her sisters, Hattie Mullis Dickens and Ella Dewey Mullis. The memorial service will be held at 11 a.m. Thursday at First Baptist Church with the Rev. Dr. Thomas A. Bland Jr officiating. The family will receive friends in the church parlor following the service. A private graveside service will be held prior to the memorial service.

In lieu of flowers, the family requests that donations be sent to The Music Department, c/o First Baptist Church, PO Drawer 459, Morganton, NC 28680. Sossoman Funeral Home is assisting the family with the arrangements. Condolences may be made online at www.sossomanfuneralservice.com.