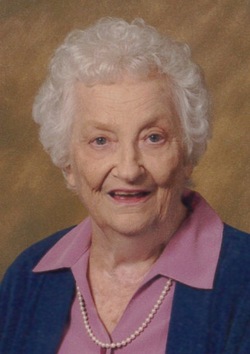 Mrs. Mullis died on August 9, 2010 at Presbyterian Hospital following a long illness with her family at her side. She was born on September 30, 1921 in the family home in Dilworth, the last child of Pearl Cahill Oakley and John Benjamin Oakley. A child of the Great Depression and an honor student at Central High School, she graduated in 11 years in order to work to support herself and to help her family. She met the love of her life, Robert Boyte Mullis, Sr. at Sustar’s Swimming Pool in Matthews, NC, while dancing the “Big Apple.” They married March 1, 1940. Following Robert’s return from World War II, Virginia and Robert, members of the Greatest Generation, used hard work and determination to build a family business. The Dinner Bell Company, a wholesale food company specializing in fresh-made sandwiches, operated in Charlotte for 55 years.
With her husband she was a founding member of St. Paul United Methodist Church in the Sedgefield community. She continued her spiritual quest all of her life, seeking the highest expression of God’s love in all.

A “working mother” long before the term existed,Virginia was lovingly devoted to her family and raised three children while continuing to work in the family business. In her later years she enjoyed traveling extensively across the country and around the world, and being a member of the Sweet Adelines of Charlotte. She was preceded in death by her parents, five siblings and husband of 58 years. She is survived by her children Robert, William and wife Margie, Virginia Mullis-Phifer and husband Robin Phifer. She is also survived by three grandchildren, W. Paul Mullis, Jr., Virginia Mullis Zello and husband Craig, Benjamin Mullis-Phifer, one great-granddaughter, Kathryn Joan Zello, and a number of nieces and nephews.

A celebration of her life will be held Wednesday, August 11, 20I0 at 2:30 pm at the Cypress Club of Charlotte in the Community Room, 3442 Cypress Club Drive, Charlotte, NC. An ice cream social will follow. Entombment will be private.

The family expresses sincere gratitude to Dr. Stuart J. Garner of Presbyterian Pulmonary and Critical Care for his years of compassionate care and the staff at the Stewart Health Center of the Cypress of Charlotte for their devoted service.

In lieu of flowers, the family asks memorials be made to The House of Mercy, a Hospice for people with HIV/AIDS operated by the Sisters of Mercy, 701 Mercy Drive, Belmont, NC, 28012 or to St Paul United Methodist, 2830 Dorchester Place, Charlotte, NC, 28209
Facts