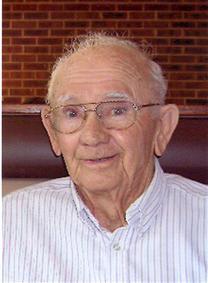 He was born on June 13, 1924, in Morning Star Township, Mecklenburg County, NC, to James Leonard and Cora (Ford) Mullis.

Mr. Mullis was a WW II veteran, having served his country in the U.S. Navy from Nov. 23, 1943, until his honorable discharge on Mar. 30, 1946. He received the Asiatic Pacific (3 stars), the American Area Medal, the Victory Medal, and the Philippine Liberation (2 stars).

He was united in marriage to Ann Carroll on May 14, 1949, in Charlotte. Following marriage, the couple resided in Charlotte for three years. In 1952, they moved to Decatur, Georgia. They moved to Matthews, NC, in 1967.

He was a foreman for Huntley Construction in Charlotte.

Mr. Mullis was a member of the Bible Baptist Church in Matthews.

His family will receive friends on Monday, Jan. 31, 2011, from 10:00 to 11:00 a.m. at the McEwen-Mint Hill Chapel, 7428 Matthews-Mint Hill Rd, Mint Hill, NC, followed immediately by his funeral service at 11:00 a.m. The Reverend Dr. Ron Allen of the Bible Baptist Church in Matthews will officiate. Interment will follow in Sunset Memory Gardens, 8901 Lawyers Rd., Mint Hill, NC.

Mr. Mullis was preceded in death by his parents, one brother, and three sisters.

The family would like to thank Heather, Lyndia, and Teresa at Presbyterian Hospice and Health Care for their special care.

Condolences to the family may be offered at www.mcewenminthillchapel.com. Arrangements by McEwen-Mint Hill Chapel.