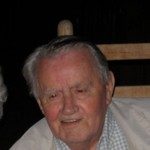 Interment will follow the service at Sharon Memorial Park.

Mr. Mullis was born on March 28, 1918 in Alexander, NC, son of the late Augustus and Ova Deal Mullis. In addition to his parents, daughter, Theresa E. Mullis and son, Joseph C. Mullis also preceded him in passing.

John graduated High School in Taylorsville, NC and went on to serve his country in the US Army as a Master Sergeant during WWII where he was in charge of intercepting and coping Japanese Code. He later continued his dedicated service by joining the National Guard as a Lieutenant.

Following his military career, John returned to a job with Bell South Telephone Company. He was a dedicated and faithful employee until he retired as a supervisor in 1976.

John enjoyed many hobbies including a little golf and amateur radio. He was a loving husband, father, grandfather, brother and friend and will be deeply missed by all who knew him.

In lieu of flowers memorials should be made to Holy Angels, P.O. Box 710, Belmont, NC, 28012. Belmont Abbey College or The Theresa Eileen Mullis Nursing Scholarship at CPCC in Charlotte. Arrangements are in the care of Heritage Funeral Home, Weddington Chapel.

An online guestbook is available at www.heritagefuneral.net

Published in Charlotte Observer on February 12, 2010

March 03, 2010
Dear Mullis Family,
Our prayers are with all of you during your time of sorrow and loss. We know you have countless memories of a wonderful husband and father and hope they will always provide comfort to you.
With sympathy,
The Palmer Family
February 26, 2010
The family of the late Robert and Mildred Daney wish to express their sympathies to the entire Mullis family on the loss of John Mullis. Dad (Robert) served in WW2 with John and have been loyal friends ever since. Mildred and Madeline became good friends over the years too. I will never forget the hospitality extended to me and my family as we paid a visit to John and Madiline in 1999 while on vacation to Myrtle Beach , SC.

The entire Mullis extended family are in our prayers.

for the entire Daney Family ,

Robert B. Daney, Jr.
~
Robert Daney, Jr,
Lambertville, Michigan
|
Contact Me
February 19, 2010
Dad, You will always be my hero, my friend and the best dad ever. I treasure all the time we spent together especially over the last few months. My heart still is broken but I am glad you are at peace.
I love you More.
Catherine
~
Catherine Mullis,
Charlotte, North Carolina
|
Contact Me
February 16, 2010
You will be missed, JB. You were a great man, great father and husband. God bless you.
~
John Mullis,
Germantown, Tennessee
|
Contact Me
February 13, 2010
Uncle John was a wonderful man to lots of people. My prayers are with you and the whole family. Maryann and Robert Witkowski Ellensburg, Wa.