On March 6, 2002, Tarheel Sports Car Club lost one of its dearest and most faithful family members.

John
Mullis joined THSCC in 1994. From that time until his death, John was
always there to offer his support to both the club and any member. As
president of Jamestowne Homes, Inc.®, John was a long-time sponsor of
THSCC and his assistance was instrumental in getting the THSCC Time
Trial series off the ground in 1999. John enjoyed his friends greatly
and opened his home often as a place for us all to gather and have fun
together. We will always remember John for his warm smile, his
graciousness, and his gentle and generous heart.


"Apex–John A. Mullis age 56, died suddenly and peacefully March
6, 2002, at Wake Medical Center. He was born August 28, 1945 to Thad
McCoy Mullis and Virginia Broyhill Mullis Armfield. He is survived by
his mother; his wife, Georgianne; two brothers, Thad McCoy Mullis, Jr.
and Leon I. Mullis; one sister, Virginia Maria Mullis; two sons, John
M. Mullis and T. Mack Walsh; three daughters, Jan M. Cooper, Virginia
"Ginny" Mullis, and Alicia W. Toomey; and two grandchildren, Justin and
Christoper Cooper.
John was the president and founder of Jamestowne
Homes, Inc. and built many beautiful homes in and around the
Raleigh/Durham area. He took great pride in his work and put his heart
into every home he built. His work has won many Parade of Homes awards
and was featured in Triangle Home Ideas. He was also a Board Member of
the Home Builder’s Association for Durham and Chapel Hill and served as
an officer for several years.
He was an active member of Genesis United Methodist
Church and loved singing in the church choir. John was also a member of
the Tarheel Sports Car Club and loved racing.
The family will receive friends from 7:00 p.m. to
9:00 p.m. Friday, March 8, 2002, at the Cary Funeral Home, 3700 NW Cary
Parkway.
A funeral service will be held at 10:00 a.m.
Saturday, March 9, 2002, at Genesis United Methodist Church, in Cary.
There will also be a burial service 4:00 p.m. Saturday, March 9, 2002,
at the Blue Ridge Cemetery, in Lenoir, N.C.
Donations may be made to:

THSCC
has acquired a limited number of vinyl bumper stickers to display on
our cars in memory of our dear friend. They are $5.00 each and proceeds
go to Habitat for Humanity in John’s name. If you knew John and would
like one of these vinyl stickers, email Mark Vitacco for more information.

John
was a Miata lover, owning both a 1993 black supercharged and 2002
"vivid yellow". In addition to autocrossing and running track events
with THSCC, in the mid-’90s, he was also a member of the Tarheel Miata
Club with whom he often enjoyed caravanning his Miata on beautiful road
trips. We know John was smiling on March 9, 2002, as he looked down on
six top-down Miatas of THSCC and family members caravanning for him one
more time from Cary to his final resting place in his hometown of
Lenior. 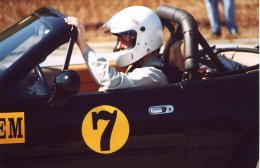