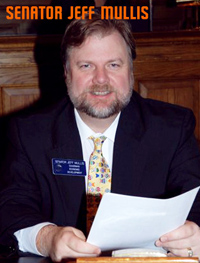 OUR OPINIONS: Confederate heritage? Forget it

State Sen. Jeff Mullis (R-Chickamauga) has proposed a splendid way to recognize Georgia’s contributions to American history during a pivotal period in time.

He wants to establish a permanent Confederate History and Heritage Month. What better manner to encourage tourism related to the Civil War and to demonstrate how far Georgia has come since then?

Mullis’ proposal, Senate Bill 283, sailed through the Senate Rules Committee last week. If adopted by the General Assembly and signed by Gov. Sonny Perdue, April would be designated as the month to contemplate Confederate heritage. Elementary and secondary schools, as well as the state’s universities, would be urged to incorporate that heritage in history lessons.

It’s a wonderful idea. The senator’s bill would do all of Georgia a service by reminding everyone of the desperate lengths to which the South was willing to go to preserve the cruelty and injustice of slavery.

Schoolchildren, for example, could spend the month reciting the names of the quarter-million or so Southern men and boys who died from wounds or from disease in their vain effort to keep their black brothers and sisters in bondage, not to mention the untold others who went home maimed after the war.

Our children could work on their math by trying to estimate how many widows and orphans were left behind. Or on economics by calculating how badly the war damaged southern industry and agriculture and how long it delayed prosperity’s arrival in the South.

Our children could tour Andersonville, where the Confederacy so starved and weakened Union prisoners that an appalling 13,000 died there.

Our children could ask why the terrible suffering occurred.

Thanks to Mullis, we could answer that it was because one group of people wanted to keep another brutalized and subservient.

Thanks to Mullis, it’s possible that part of history will never be forgotten.

Of course, no proper observation of the Confederate heritage would be complete without an re-enactment of some sort. We surely don’t want to re-enact the whipping of a slave or the forced breakup of a black family or the sexual exploitation of black women by their masters. That might stir up demands for an official apology from the state of Georgia, and some legislators have already made it clear that no such apology will be forthcoming, that’s it’s time to look forward, not backward.

Except, of course, for Confederate History and Heritage Month.

Instead, maybe we should re-enact the April 9, 1865, surrender of Gen. Robert E. Lee to Gen. U.S. Grant at Appomattox Court House. Because apparently some people still need to be reminded that the war is over, and that the South lost, and that the South’s defeat was one of the best things that ever happened to this country.