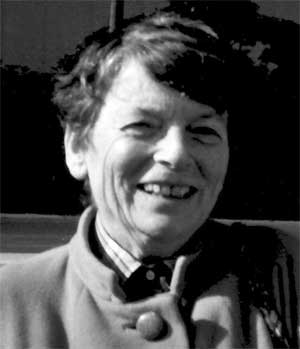 Born in Washington D.C. in 1923, G.B. graduated from Smith College
with a degree in Art History. She worked as a teacher and librarian in
public schools, taught English as a second language, and in her later
life worked as a caregiver in the San Francisco Bay area. During the
years G.B. worked in public schools, she spent her summers as camp
counselor at Plantation Camp in Fort Ross, California with her children
there as campers. She traveled extensively with her children during her
early adult life, living in Singapore, Thailand, and Mexico. Her last
home was in Friday Harbor where she met and married Wally Mullis.

G.B. will be remembered by those who knew her as one who took great
pleasure in living simply with few possessions. She was a great
conversationalist and an adventurous cook. She read widely and was
knowledgeable on many subjects from gardening to philosophy. She had a
keen appreciation and understanding of art, architecture, classical
music and the subtleties of the English language.