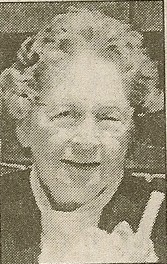 NASHVILLE — Genevieve M. Mullis, 79, of Bloomington died on Friday, April 25, 2008, at Brown County Health and Living Center in Nashville. She was born March 9, 1929, in Bloomington, the daughter of James and Della (Bradley) Morrison. She retired from the Food Service of the Monroe County Community School Corp. and was of the Pentecostal faith. She married Albert Mullis on August 4, 1946, and he preceded her in death.

Funeral services will be at 1:30 p.m. Monday at Allen Funeral Home, with Revs. Frank Gott and Lloyd Cheek officiating. Burial will be at Duncan Cemetery in Brown County. Friends may call from 10:30 a.m. until time of service on Monday.