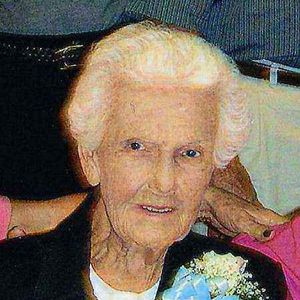 One of the earlier citizens of Waycross, she was born on Tuesday, May 4, 1909 while her family was living on Miller Street. Her mother died of appendicitis in 1919, at which time she continued to live with her father. Then as a teenager she went to live with her older married sister, Maude (Lovett) Thigpen who lived at Waresboro. She graduated from Waresboro High School in 1926. She married Henry Floyd Mullis on December 22, 1929. Their wedding was held at the Waresboro United Methodist Church parsonage and conducted by the Rev. W. C. Rahn.

Her life reflected a quiet love and devotion to her immediate and extended family, especially her special needs youngest son, Bill. She was a lifelong homemaker and resident of Ware County, having lived in Waycross, Jamestown, Waresboro, and finally for fifty years on Cleveland Street in Winona Park. She was an active member of Winona Park United Methodist Church until health and aging infirmities prevented her from attending.

The family would like to especially thank the following for their love, care, and concern for their mother over the years: Nell Watson, Roy McClung, Sylvia Odom, Jack Douglas, Pat Thomas, Roselyn Connell, Lana Rogers, and Dr. Robert Packer and staff.

A funeral service will be held 2 p.m. Tuesday (November 23, 2010) at the Music Funeral Home Chapel. The family will receive friends one hour prior to the service beginning at 1:00 p.m. While there will be no formal procession to the cemetery, family and friends who wish to attend the interment may meet shortly after the service at Oakland Cemetery.

In lieu of flowers, the family requests that memorial contributions be made to Winona Park United Methodist Church, 900 N. Augusta Ave., Waycross, GA 31503.