Drug users take methadone thinking it is less dangerous
than other drugs. But it causes more deaths in the state than any other
drug. 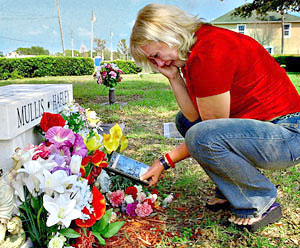 Deaths from methadone, considered by many a "safe" painkiller, are
spiraling upward so fast it has become the leading drug killer in the
state of Florida.

In the first six months of last year, methadone overdoses killed
264 Floridians, tied with cocaine as the leading cause of overdose
deaths. That was a 50 percent increase over the previous six months for
the drug that most people associate with clinics to help addicts kick
heroin.

But methadone is a powerful narcotic, too – one that, these days,
is killing far more people than heroin. It’s also a bigger killer than
more notorious prescription drugs, such as OxyContin and Vicodin.

"This can be a very deadly drug," said Jim McDonough, Florida’s
drug czar. "It can also be a very helpful drug, but if abused, it’s
very deadly."

Methadone’s reputation for safety contributes to its danger.

Over the past few years, doctors worried about the publicized abuse
of OxyContin and similar painkillers have prescribed methadone instead.
U.S. methadone prescriptions more than tripled between 1998 and 2003,
to 1.8-million. That has made it easier for abusers and drug dealers to
obtain it.

People who would stay away from better-known dangers, such as
heroin, mistakenly believe methadone is safe, addiction experts say.

"That’s what we see over and over again," said Robert Lubran, an
official with the federal Substance Abuse & Mental Health Services
Administration. "People who take it without really understanding the
danger, thinking they’re going to get high – but it has this really
deadly effect."

Methadone overdose deaths have been rising around the country,
Lubran’s agency found in a report released last year. The report found
that the number of such deaths reported in one federal database doubled
from 2001 to 2002. Emergency room visits for methadone overdoses in 21
major U.S. cities increased 230 percent from 1994 to 2001.

Drug abusers take methadone without knowing it’s even riskier when
combined with other drugs. Teens raid their parents’ medicine cabinets
and steal their methadone pills. Small children find stray pills and
pop them in their mouths.

One pill alone can kill a toddler.

When Seminole resident Sandy Zalewski was told about her son’s death, she thought he must have had a terrible accident.

She was proud when he started his tree-trimming business, sure he
was putting his life back together. But she worried it was dangerous.

Then she heard: overdose. She thought cocaine, the drug he battled for years, had finally claimed him.

But it didn’t. It was a new drug, one that Zalewski didn’t know her son, 32-year-old Bobby Mullis, had ever taken before.

She called the medical examiner to make sure.

"Methadone?" she asked. "What is methadone? Isn’t that something to get off heroin?"

It is. But it’s also is a prescription painkiller leaking onto the streets.

For heroin addicts, methadone is useful because it lasts. It
doesn’t give the euphoric high of heroin, and it stays in the body for
hours, even days, blunting painful withdrawal symptoms and heroin
cravings.

But for methadone abusers, the lasting effect makes it more
dangerous. In Pinellas County alone last year, methadone either killed
or contributed to the deaths of 26 people. In Hillsborough, it was 52.

Methadone’s pain relief wears off after about six to eight hours.
But the body metabolizes methadone slowly. A person’s body still
contains half the dose 24 to 36 hours after taking it.

"A lot of people don’t understand it is a very long-acting drug,"
said Lubran, who is director of the division of pharmacologic therapies
at the federal substance abuse agency. "You don’t get high in the first
15 to 30 minutes. People are taking more than they should be taking."

What’s more, people break down methadone at different speeds, said
forensic toxicologist Bruce Goldberger, director of forensic medicine
at the University of Florida College of Medicine. Some people still
have half the dose five days later.

Methadone was approved by the FDA as a painkiller in 1947. In the
1960s, doctors realized that daily methadone could help heroin addicts,
leading to the clinics where addicts still receive the drug today. For
the first few months of treatment, addicts must go to a clinic almost
every day, where someone watches as they take their methadone doses.

While some clinic patients may sell their methadone, a federal
report released last year, which Goldberger helped write, concluded
that wasn’t the reason why methadone deaths started to rise.

The more likely cause, addiction experts believe, is the shift in prescribing.

"The physicians who were regularly prescribing OxyContin were put
under a magnifying glass," Goldberger said of the powerful
time-released painkiller that came under FDA scrutiny about four years
ago. "With the widespread abuse of OxyContin, a lot of physicians began
to distrust their patients."

And so they turned to methadone.

Dr. Rafael Miguel, program director of pain medicine at the
University of South Florida College of Medicine, is passionate about
providing powerful drugs to those who live in constant pain. Such pain
changes lives, he says. It drains souls.

But Miguel knows some of his patients are liars.

"We are all being fooled," he tells colleagues when he gives
lectures about pain medicines. "We all have patients who are taking it
just to get high."

Miguel, a former member of the Florida Board of Medicine, regularly prescribes methadone himself.

Methadone is dangerous because it depresses the central nervous system and slows breathing.

Young children are especially sensitive, said Vincent Speranza,
managing director of the Florida Poison Information Center, based at
Tampa General Hospital. Nationally, 11 percent of the medication deaths
among young children are from taking methadone, he said.

It’s especially powerful in combination with other drugs that also
affect breathing – other opiates and such drugs as Valium and Xanax.
Overdose victims often have taken more than one drug.

Because of methadone’s duration, combining drugs is risky days later.

"You party with methadone Thursday," Miguel said. "You go to work
on Friday, on Saturday you mow the lawn. Saturday night you crack an
OxyContin on the dance floor, and you kill yourself."

Other drugs, from antibiotics to heartburn medicine, also can
affect methadone levels because the body metabolizes them the same way.
So once someone takes such a drug, the body breaks it down instead of
methadone.

Doctors can cut down on abuse, Miguel said. He checks MRIs and
other tests to make sure the pain is real. Former doctors are called.
Some doctors make patients take drug tests. They check whether the
patient is taking other drugs – and also whether he or she is taking
the prescribed painkiller, not selling it.

Miguel prescribes other drugs, rather than letting patients rely
solely on narcotics. He prescribes lower daily doses than some other
doctors, even when he’s had patients get a second opinion and return
with a prescription for three times more.

Still, there are limits.

"Once the patient leaves your office," he said, "There goes your control."

A pill for everything

"As a society, we have let our young people down. There’s a pill
for everything now," she said. "I know a lot of these are helpful, but
we’re sending the wrong message: "If you take this pill, it’ll help.’ "

Last year, Murphy’s daughter and her boyfriend were found dead in
his apartment, a lethal cocktail of several drugs in their blood.
Methadone was one of them. Stephany McClure was 17.

It is such deaths that lead drug czar McDonough to label the illegal diversion of prescription drugs as his top concern.

"What you really have is mass murder, a new type of mass murder,"
he said. "These are not light casualties . . . every day, five more
die."

Such drugs include OxyContin, Percocet and Vicodin as well as
methadone. McDonough, whose official title is director of the Florida
Office of Drug Control, called methadone "one of the worst."

Florida has formed several state and federal "diversion response
teams" to investigate pill dealers. Some doctors have been charged with
fraud, trafficking and murder for pushing pills.

Still, such cases often are harder to investigate and prove than
busting a cocaine or heroin ring. Just having the drugs isn’t illegal.
Police have to prove illegal sales. It also can be hard to link an
overdose death to a specific pharmacy or doctor.

After McClure died, investigators pursued several theories about where the drugs came from that killed her and her boyfriend.

No arrests have been made.

One of the best ways to cut overdoses would be a centralized
registry of narcotic prescriptions, say Miguel and McDonough. McDonough
has been trying to get a bill for such a registry passed for three
years now, but so far some lawmakers’ worries about privacy have
stalled the bill.

The registry would list narcotics prescriptions, allowing
pharmacists to make sure people aren’t getting multiple prescriptions
from different doctors and filling them at different drug stores. Other
states already have such registries, the pair said.

"Florida is a particularly bad offender in this regard," Miguel said. "We can’t continue to wait, because people are dying."

Zalewski and Murphy want greater public awareness of how dangerous
methadone is. If their children had known just how risky the drug is,
both women said, they might still be alive.

Instead, they are struggling with dates they never wanted to see.
Last month would have been Stephany McClure’s 18th birthday. Next month
will mark the first anniversary of Bobby Mullis’ death.

Zalewski will have a memorial service and invite her son’s friends. His dog Cheeko will be there too.

She thought that her son had finally beaten drugs, that there would
be no more rehab programs, arrests or broken promises. No more
late-night calls, confessing and begging for rescue.

"He’s really going to make it," she told her sister.

Mullis had been clean for nearly four years. He had a long list of
business clients. He sent his mother to Las Vegas for her birthday. He
bought a boat.

But one night last June, an old friend asked him to buy some
cocaine, just this once. He did. Zalewski still doesn’t know when he
took the methadone.

She just knows that the day he died, she took him to breakfast. He
ate bacon and eggs and said he was sorry about the cocaine. He promised
he was back on track. Then Mullis went home to take a nap, Cheeko at
his side.

He never woke up.

"I don’t think people realize," Zalewski said, "that when you take
that drug and mix it with anything else, you’re playing Russian
roulette."

Methadone is a synthetic narcotic. Brand names include Dolophine
and Methadose. It is an effective pain reliever and has been used for
decades as a way to help addicts stop using heroin. But when misused,
it can be deadly.

Methadone is dangerous because it slows breathing and depresses the
nervous system. It stays in the body for days, and other drugs can
magnify its effects.

Speedy medical treatment can save someone from an overdose. Anyone with overdose symptoms should call 911.

Sandy Zalewski reads a poem, entitled "You are Always With Me," she
keeps at the grave of her son Bobby Mullis, who died of a methadone
overdose in June.