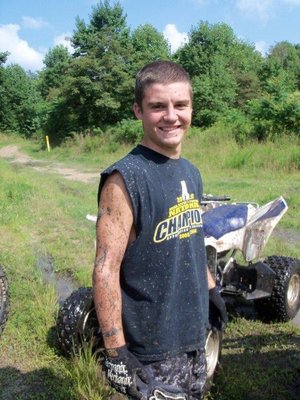 The high country was left reeling this week from the tragic death of Ashe County native Austin Dakota “Kody” Mullis.

“It’s just, it’s a big shock to lose Kody,” said his aunt Angela Scott Roten. “We forget sometimes how fragile this life is until we’re reminded.”

Seventeen-year-old Mullis, along with family and friends, was spending the weekend riding ATVs in West Virginia, on a part of the Hatfield-McCoy trail system known as the “stair-step.”

After a full day of riding Saturday, Mullis’s group returned to their campsite and prepared to turn-in for the night.

The lure of one last ride was too great, however. “They wanted to make one last run up the trail. It was supposed to be a short twenty minute ride, and Kody didn’t wear his helmet. He never rode without his helmet, but this time he did,” said Roten.

As they raced up the trail in the twilight, Roten said Mullis, along with his girlfriend, lost control of the machine sometime around 9:30, slammed into a guardrail and both were thrown down an embankment. Witnesses said Mullis was thrown some 48 feet into the air, impacted a tree, and came to rest somewhere further down the hillside.

With only a sprained knee, Mullis’s girlfriend was able to alert first responders who arrived in seven minutes. He was transported to Bluefield Regional Medical Center, and later airlifted to Carilion Roanoke Memorial Hospital where he was pronounced dead.

“Doctors said the severity of the head injury, and the way he hit the tree and the ground, even if he had been wearing a helmet, it may not have saved his life,” said Roten.

Mullis, the son of Heather Scott Graham and Robbie Mullis, spent his early years in Ashe County, and moved with his father to Lenoir in the eighth grade. He was a rising senior at West Caldwell High School and planned to join the military and become a diesel mechanic after graduation.

“It’s just tragic. We’re all going to miss his smile,” said Roten. “He left this life doing what he loved the most; riding. If it had wheels, he would try to tame it, and that’s the way he did things.”

“We’re hoping some good will come from this. Because he was such a caring person, Kody’s organs will be used to help someone else. It’s what he wanted,” said Roten.