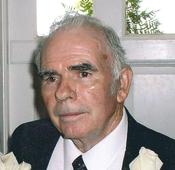 Mr. Mullis is the son of the late Liege and Effie Threatt Mullis. Mr. Mullis worked for Douglas Aircraft in Charlotte, NC. He later became a Minister.

A Celebration of Life Service will be held at 3:30PM Thursday, September 1, 2011 at Rose Memorial Church of the Nazarene. The interment will follow at Greenlawn Memorial Park.

Memorials may be made to, Rose Memorial Church of the Nazarene, 1005 N Pearl Street, Pageland, SC 29728.