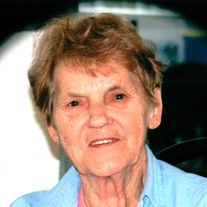 Ms. Julia Rivers Mullis, 81, of Pageland, SC went to be with the Lord on Friday, January 16, 2015 while surrounded by her loving family.

Ms. Julia Rivers Mullis was born on November 27, 1933 to the late Horace and Tessie Rivers. She later united in marriage to Floyd W. Mullis who precedes her in death. She retired at Dawson Industry as a knitter. When she retired, she enjoyed spending time with her daughters and grandchildren. She was a member of Mt. Pisgah Baptist Church. Ms. Mullis is preceded in death by her Sister, Kate Plyler.

A Celebration of Life Funeral Service will be held at 3:30 PM on Sunday, January 18, 2015 at Mt. Pisgah Baptist Church with Pastor Jeremiah Henderson and Pastor Gerald Rivers officiating. The burial will follow at the Church Cemetery.