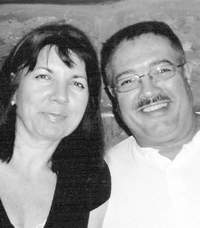 Mr. Mullis received his general equivalency diploma in 1981 and
joined the Army, serving in Fort Sill, Okla. He started working
with the Department of Justice for the Federal Bureau of Prisons in
1991 and is serving in Iraq.

Mrs. Mullis graduated in 1982 from General Brown Central School,
Dexter, and has worked at HSBC bank and the law office of Michael
Almasian, both in Massena. She is employed by the city courts of
Ogdensburg.