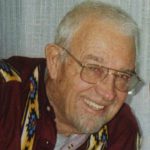 Morris was born on August 11, 1935 in Orleans, Nebraska a son of Carl R. & Adria G. (Newton) Mullis. He grew up in several communities in southern Nebraska graduating in 1953 from Beaver City High School.

He was married on July 14, 1958 in Beaver City, Nebraska to Lana L. Hall. They made their home in Holdrege, Nebraska where Morris was employed by the Rural Electric Company for 10 years. During this time he many trips to Wyoming to hunt and fish. A job opportunity came about and the family moved to Ten Sleep, WY in the fall of 1969. He began his employment for as a working foreman for REA finally retiring on December 14, 1995.He enjoyed hunting, he could be found at Boysen Reservoir fishing whenever possible. He also enjoyed 4-wheeling with family and friends. He made many Macramé chairs and loved to weld.

He was a member of the Cloud Peak Good Sam’s Club.

He was preceded in death by his parents and one brother Richard Mullis. He is survived by his wife Lana of 53 years of Ten Sleep, three sons; Phillip Mullis, Norman & (Penny Stalder) Mullis all of Ten Sleep, Aron & (Penny French) Mullis of Worland.

Memorial services will be held later this spring in Ten Sleep; Burial of the cremains will be in the Ten Sleep Cemetery. Memorial contributions may be made to the Ten Sleep Library or the Ten Sleep Fire Department in care of Bryant Funeral Home PO Box 524 Worland, WY 82401. Online condolences may be made at www.bryantfuneralhomeonline.com or mailed to PO Box 166 Ten Sleep, WY 82442.