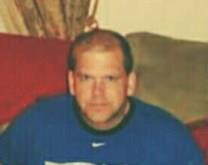 Michael Jamie Mullis passed away on April 15, 2017.
He was born on June 26, 1972 to Jeanie Brown Mullis and Michael Caldwell Mullis.
Jamie graduated from West Mecklenburg High School in 1990. He had been employed in the electrical field as an electrician’s helper. He was a huge Virginia Cavaliers basketball fan and always pulled for his Dallas Cowboys football team. He also loved fishing and golfing.
Jamie was preceded in death by his brother, Kevin Lamar Mullis. He is survived by his mother, Jeanie Brown Mullis; father, Mike Mullis and wife Shirley; sister, Michelle Mullis Hale; brother-in-law, Michael Hale; nephew, Michael Jacob Hale; and numerous aunts, uncles and cousins.
Jamie will be lovingly remembered for his great sense of humor and his kind heart.
The family will hold a visitation on Wednesday, April 26, 2017 from 2:00pm until 4:00pm at Forest Lawn West Funeral Home. A graveside service will be held at a later date.
In lieu of flowers, memorials may be made to the American Heart Association . Offer condolences through forestlawnwest.comUPDATE:
Michael Jamie Mullis passed away on April 15, 2017. There will be a graveside service on Monday, May 8, 2017 at 2:00pm in the Forest Lawn West Cemetery; visitation one hour prior at 1:00pm at Forest Lawn West Funeral Home.