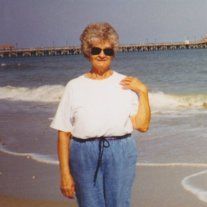 A service to celebrate the life of Mrs. Mullis will be held Wednesday, July 24, 2013 at 1 pm at Lancaster Funeral Home Chapel with the Rev. James Chappell officiating. Burial will be in the Lancaster Memorial Park.

Mrs. Mullis is survived by one son, Ronnie Usher of Lancaster; one daughter, Donna Phillips and her husband Gene of Lancaster; one brother, Cecil Courtney of Monroe; three sisters, Joann Tucker of Charlotte, Mildred Parker of Wingate and Lillian Moser of Monroe; and one grandchild, Pam Phillips. She is preceded in death by three brothers, Floyd Courtney, Edward Courtney and George Courtney; and one sister, Bobbie May Mullis.

The family will receive friends from 6 p.m. until 8 p.m. Tuesday, July 23, 2013 at Lancaster Funeral Home and other times at the home of Donna Phillips, 1651 Springdale Road, Lancaster.

Notes to the family may be made at www.lancasterfuneralhome.com.