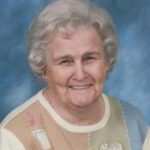 Mrs. Furr was born March 17, 1920 in Cabarrus County to the late Robert McKinney and Sarah Ellen Mullis McKinney. She was also preceded in death by her husband, Claude William Furr, in 1995.

The family will receive friends from 6 – 8 p.m., Saturday, Jan. 14, at Hartsell Funeral Home of Midland. The funeral service will be at 2 p.m., Sunday, at First Baptist of Stanfield. The body will be placed in the church 30 minutes prior to the service. Rev. Steve Sells, Rev. Bruce League, and Rev. Brandon Bowers will officiate. Burial will follow in the church cemetery.

At other times, the family will meet at her home.

Survivors include her sons, Willis, Richard, Henry, Gearl, and Ricky all of Stanfield, David of Locust, and Hubert of Gold Hill; her daughters, Claudia Mesimer of Stanfield, Barbara Osborne of Mint Hill, and Gertie Swaringen of Norwood; 25 grandchildren and 40 great-grandchildren.

Memorials may be made to Hospice of Stanly County, 960 North First Street, Albemarle, NC 28001.

Hartsell Funeral Home of Midland is serving the Furr family.