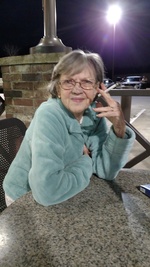 Born in Rabun County Georgia, April 4, 1941, she was the daughter of the late John Fort Fountain and Lois Cunningham Fountain. She was a home maker and a member of the Blue Heights Baptist Church.

Martha’s family is at the home of her daughter Tracy Turpin on Warwoman Road Clayton, Georgia. Family asks that in lieu of flowers memorial donations be made in her honor to Hunter Funeral Home P.O. Box 653 Clayton, GA, 30525, to aid with funeral expenses.

Hunter Funeral Home is in charge of arrangements.