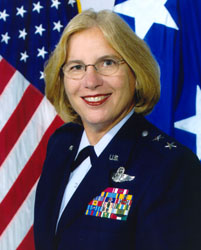 current full time job is as a
Captain with Federal Express flying the Boeing 727.

Betty received her start in aviation when she joined the United States
Air Force in
April 1972. During Betty’s career in the armed forces, she has logged
time in KC-135’s, C-130’s, C-141’s, T-37’s and T-38’s. Betty is
currently serving in the Air Force Reserves.