Lyons scout leader honored with highest award from the district 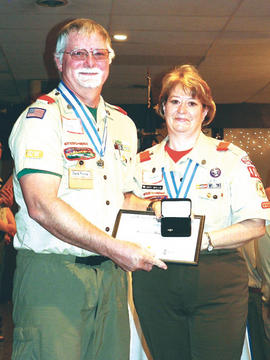 A rural Lyons man has been honored with the Boys Scouts of America’s highest leader award at the district level.

William “Buck” Mullis, Scoutmaster for Troop 407, is the recipient of the Silver Beaver Award.

The award was made at the Hoosier Trails Council annual gala April 4 in Seymour.

Mullis has been a long-time Scout Leader, holding positions as Cubmaster, Merit Badge Counselor, Associate Venture Advisor as well as scoutmaster for the last 12 years.

He had previously earned the District Award of Merit, Den Leader Award, and Quality Unit Award.

“His dedication as a leader, volunteer, mentor and trainer exemplifies the values and mission of the Boy Scouts of America,” said Cindy Miller, spokesperson for the Hoosier Hills Council, which includes 350 registered members in Greene County. “The purpose of this gala was to bring the entire council together to celebrate the successes and honors that volunteers and Scouts have achieved throughout the year.”

The Silver Beaver award was introduced in 1931 as a means of recognizing Scouters who provided distinguished service to youth on the local level. The award is made by the National Council, upon the recommendation of the Local Council. Initially the Silver Beaver award was only presented to men. The requirements were changed in 1974 to allow it to be presented to outstanding male or female Scouters.

Mullis’ wife, Judy, was a Silver Beaver Award recipient in 2004.

This award was a surprise to Buck, who has teamed for many years with his wife to lead the scouting program sponsored by the Lyons First United Methodist Church.

The troop is not a large one — with only 11 Scouts, but has made a habit of turning out quality Scouts — including several with the Eagle rank. The list of Eagles includes Mullis’ two sons, Tyler, who’s 22 and Ryan, who will turn 21 in June. Other Eagles from Troop 407 include Eric Calvert and John Price.

Two current troop members, Jeremiah Calvert and Russell Johnson, are completing final work and will be awarded Eagle rank in the near future, according to Mullis.

Mullis, who works at Wabash Valley Correctional Facility at Carlisle, said he became interested in the Scouting leadership program when his boys were younger.

Actually he and his wife went to a meeting to sign up his boys for Cub Scouts and left as the Pack Leaders.

Mullis, a scout himself, said he was interested in being involved in the program in order to keep the youngsters busy, stay out of trouble and help them to become leaders.

“My main thing is if we can keep these boys busy in scouting we are keeping them off the street and teaching them some life skills they can use.”

This Silver Beaver award isn’t just focused solely on scouting activities. It considers other community service activities and Mullis is active in several.

At WVCF, Mullis works as the laundry foreman, overseeing the cleaning of about 8,000 pounds of laundry each day.

Mullis and his wife do a “Women in the Outdoors” program for the National Turkey Federation where they teach outdoor cooking methods.

In addition, last August, the two organized a Sunday in the Park program in Lyons designed to increase the fellowship in their small town. The day included an interdenominational church service, a ham and bean dinner, plenty of music and a lot of visiting among the town’s residents. They are planning to conduct the program again in August.

Mullis said he loves what he’s doing and hopes he can continue to make a difference in the lives of the young scouts that he leads.

“Scouting has been awful good to me,” Mullis said. “I want to give our boys an opportunity to go as far as they can.”

Hoosier Trails Council, through its more than 3,000 volunteers, serves more than 11,000 youth each year.

Nationally, Boy Scouts of America serves nearly 4.7 million young people between 7 and 20 years of age with more than 300 councils throughout the United States and its territories.

Submitted photo HONORED: Buck Mullis (left) and his wife, Judy, are now both Boy Scouts of America Silver Beaver Award recipients. Buck and Judy are leaders for Troop 407 in Lyons.