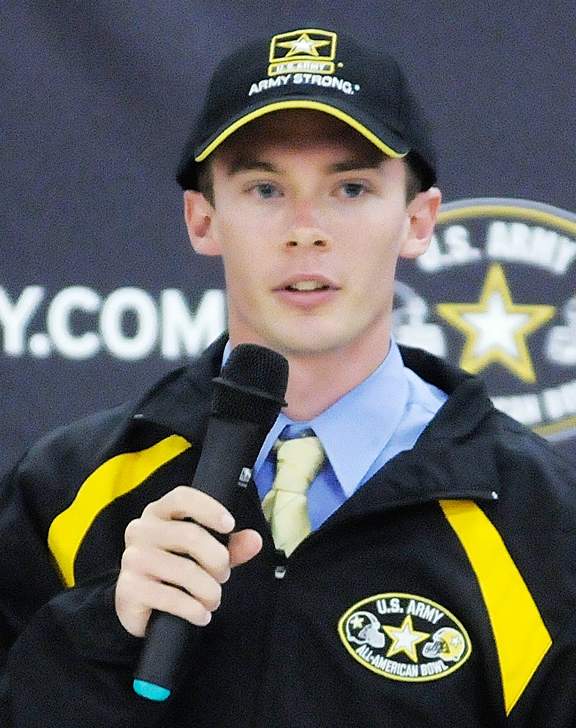 WALLBURG | A student has been given the opportunity to perform with an elite group of musicians during the halftime show at the U.S. Army All-American Bowl next year.

Ledford High School senior Dewey Mullis was selected along with more than 120 other musicians to be a member of the 2011 U.S. Army All-American Band at the Alamodome in San Antonio, Texas.

A pep rally took place Tuesday at Ledford Middle School in the auditorium, where more than 100 band students from the middle and high schools cheered on their fellow bandmate as he received his invitation.

“I’m just excited. It’s just an honor,” Mullis, 18, said. “Coming from a town like Wallburg, this means a lot to me. I just want to represent my community here the best I can.”

The seven-year band student is the drum major for the band at Ledford High. He gave praise to many people for supporting him through his band career.

“I want to thank the U.S. Army for all their support in high school music,” Mullis said to the crowd of peers. “It’s big to sponsor opportunities like this. I thank my family for all their love and support they’ve shown me. Thank you to all the band members and all the support I’ve gotten. I’m honored to be part of the All-American Marching Band. This great accomplishment is truly a blessing. I hope I represent you well.”

The marching band recognizes top seniors from across the country who play instruments or are in their color guard to showcase their talent during one of the nation’s premier high school football games. After Mullis was nominated, he had to submit an audition tape of him playing and marching as well as go through an interview process.

“It’s a great accomplishment for him and our band program at Ledford and all the county bands,” said Mike Howell, Ledford High School band director. “He has the discipline and hard work that is needed. I thank the Army and All-American folks.”

In 2009, Ledford student Wesley Richardson was also a band member of the U.S. Army All-American Bowl. Howell reminded the crowd of students that they were all talented, and being a part of the school band was important.

“You should be proud of yourself,” he said. “This is great recognition for us. With so much going on in the world, this is refreshing to have something of this nature. I also encourage all the musicians out there to look into this.”

“I’m overwhelmed and honored he gets to represent his school and the area and North Carolina,” said Marcia Mullis, Dewey’s mother. “I’m just a proud mother.”

Mullis said being a part of the band for years provides comfort for him while also giving him a form of escape and relief.

“I like being around the people,” he said. “We’re always there for each other. I was honored to be nominated. I thank everybody for their support.”