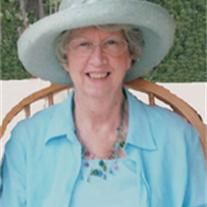 Cochran Funeral Home and Crematory of Blairsville announces funeral services for Mrs. Jean Carter, age 83, of Blairsville, who passed away Sunday, December 9, 2012, at her home.

Mrs. Carter was born in Valdosta, Georgia, on the 4th of July, 1929, a daughter of Frank Mullis and Nellie Gieger Mullis.

Jean graduated from Valdosta High School and received her Bachelor’s degree from Georgia State Woman’s College (which later became Valdosta State), and her Master’s degree from Florida Atlantic University. Her career was in teaching and administration. Mrs. Carter and her husband David Ellis Carter, Sr. moved to Blairsville in 1989, following their retirement. Jean was a member of Coosa United Methodist Church in Blairsville, and she was active in Union General Hospital Auxiliary and volunteered for 20 years at Union County Nursing Home. She enjoyed working crossword puzzles and reading.

Preceding her in death were her parents, Mr. and Mrs. Frank Mullis; her husband, David Carter, Sr.; and brothers, Perry, Roscoe, and Franklin; sisters, Ida Draffin and Marian Hollis also preceded her in death.

Jean was dearly loved and will be greatly missed by all who knew her in their lives – most of all her family: son and daughter-in-law, David, Jr. and Kathy Carter, of Savannah, Georgia; son and daughter-in-law, J. Michael and Patty Carter, of Ft. Pierce, Florida; daughter, Jan Moyle, of Orlando, Florida; and daughter and son-in-law, Mary Beth and Doug Brackett, of Blairsville; grandchildren: Sally and Rob Weiss, Lindsey and Josh Peterson, Melissa Carter, Jessica Carter, Paul Moyle, Eric Moyle, Emily Moyle and Brody Brackett.

If you wish to do so, contributions may be made in memory of Jean to Coosa United Methodist Church Scholarship Fund, 7677 Mulkey Gap Road, Blairsville, Georgia 30512.

Arrangements entrusted to the care of Cochran Funeral Home and Crematory of Blairsville. Please sign the guest registry and share condolences with the family on our website, www.cochranfuneralhomes.com.