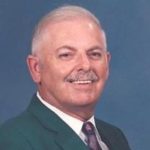 James Blair Mullis, Sr., 76, of Stanley, formerly of the Thomasboro Community, died November 1, 2011 at the Brian Center in Lincolnton, NC.

He was the son of the late Arthur F. Mullis and Annie Harrington Mullis. He retired as a driver from ADM Trucking Company in 1992. A dedicated husband, father, grandfather and great grandfather, he was a loyal friend who loved everyone and never met a stranger. He was known by family members as a sports “nut”.

In addition to his parents he was preceded in death by brother, Ronald Mullis.

A Memorial Service to celebrate his life will be held at Covenant United Methodist Church where he was a member. The service will begin at 11:00 AM, Thursday, November 3rd with Reverend David Lee officiating. The family will receive friends one hour prior to the service at the church.

Arrangements are in the care of Forest Lawn West Funeral & Cremation Service. On-line condolences may be placed at www.forestlawnwest.com.