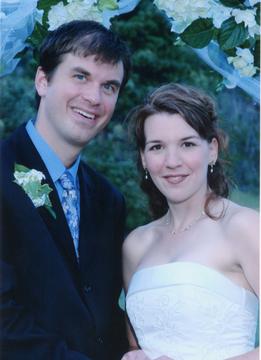 Lisa Marie Hoffman and Brian Thomas Mullis were married Aug. 29, 2004,
at Sylvandale Guest Ranch in Loveland, Colo. Rick Hoffman, father of
the bride, performed the ceremony. Guitarist and soloist was
Christopher Hoffman, brother of the bride.

Parents of the bride are Rick and Mary Ann Hoffman of Cape
Girardeau. The groom is the son of Chalmus and Diane Strickland and Tom
and Sally Mullis, all of Huntsville, Ala.

Readers were the groom’s father, stepfather, and stepbrother, Jeff Strickland.

Maid of honor was Laura Hoffman of Springfield, Mo., and matron
of honor was Julie Casey of Tochigi, Japan, sisters of the bride.
Bridesmaids were Bess Cain of St. Louis; Emily Clippard of Jackson;
Shannon Hagan of Cape Girardeau; Casey Mullis, sister of the groom; and
Amy Young of Columbia, Mo.

The reception was held at Sylvandale. Servers were Ginny Hunt,
aunt and godmother of the bride; Marsha Buchheit and Kay Hoffman, aunts
of the bride.

The groom’s parents hosted the rehearsal dinner Aug. 28 at Sylvandale.

Mrs. Mullis is a graphic designer and free-lance copywriter.

The groom received a master’s degree in education and recreation
management from Springfield College in Springfield, Mass. He is
president of Sustainable Travel International.

The couple is residing in Boulder.