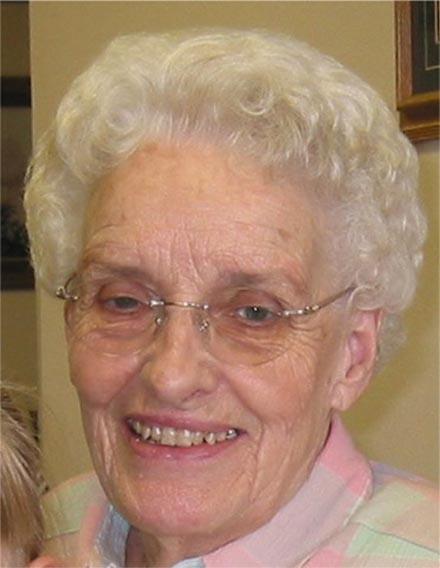 Age 87, passed away surrounded by family
members on October 18, 2007 as a gentle gust of wind came through an
open window and carried her up to heaven.

A Memorial Service was held this past Saturday, October 27, at Alki Congregational Church in West Seattle.

Laurene
was born April 23, 1920, in Bath, S.D. where she graduated from Bath
School in 1938. She met her first husband, Leslie Mullis (from Cardiff,
Wales) while living with her sister in Seattle. They married and raised
their 6 children primarily in the Seattle area. Several years after
Leslie’s death (in 1979), and several trips back to Bath, SD to spend
time with her ailing brothers, she met up with an old high school
acquaintance, Chester (Chet) Gullikson. They married in 1995 and she
moved from Seattle to Bath. After Chet’s death, she continued to live
in the Bath/Aberdeen area until the fall of 2004 when she moved back to
Seattle.

For those who knew and
loved Laurene, she was a wonderfully patient, soft-spoken, loving,
compassionate, sharing, nurturing, family centered woman who will be
dearly missed.

She was preceded in
death by her parents, her brothers Kerwin, Lester and Kenneth, her
sisters Genevieve and Shirley Weismantel all of Bath, SD, husbands
Leslie and Chet, one grandson and two nephews.

She
is survived by her children (and spouses), John (Vicki) of Bath, SD,
Dave of Seattle, Brian (Barb) of SeaTac, WA, Dexter of Seattle, Joan
(Wayne) Underwood of Renton, WA and Bruce of Normandy Park, WA, 12
grandchildren, 14 great-grandchildren, nieces, cousins and extended
family. In lieu of flowers, contributions may be made in memory of
Laurene to the "Shirley J. Weismantel Memorial Cemetery Fund"; c/o
Great Western Bank of Aberdeen; 119 6th Ave SE; Aberdeen, SD 57401; or
your favorite charity. This memorial fund was originally set up by
Laurene’s sister Shirley, for the continued beautification of the Bath
Memorial Cemetery, their family ancestral hometown cemetery.

For
further info and to share memories please visit the online living
memorial webpage and sign the "Memory Book" at
http;//lemullisgullikson.legacy.com/.