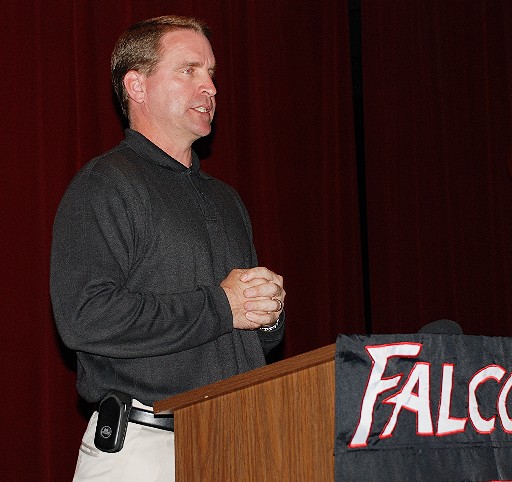 After all, the Falcons defeated Mullis’ West Forsyth teams three
times last season — including in the Region 7-AAA tournament.

But it wasn’t just the Falcons recent success that prompted Mullis
to accept the position of boys head basketball coach at Flowery
Branch.

"This is an area that, long term, can always be competitive," said
Mullis on Sunday before being introduced as the Falcons next coach
by athletic director Shannon Benton. "I obviously know they’ve got
a lot of good talent here right now. But I’m not just coming here
for two years and then leaving. I know they’ve got the ability to
be good for a long time."

Mullis — who takes over from departed coach Todd Cottrell, who
left for the same position at Gainesville High — knows a thing or
two about talent. Before signing on to coach at West Forsyth,
Mullis coached 11 seasons at Chattahoochee High School and for
three years at Middle Georgia College in Cochran before that.

Mullis averaged 19 wins per year at Chattahoochee, including three
region titles and five sweet 16 state playoff appearances. His
teams also put together a 36-game region winning streak and a
24-game home unbeaten run. His 2004 Chattahoochee squad was ranked
No. 1 in Class AAAAA, and he sent 15 different players to the
collegiate ranks.

"I watched his teams at Chattahoochee, and I’ve talked to college
coaches who took his players, and they all said his players were
fundamentally sound, knew the game and didn’t make mistakes,"
Benton said. "That’s how I want our kids to play."

Benton said he hand-picked Mullis from an impressive list of
candidates that he narrowed down to three before offering the job
to Mullis on Tuesday (April 15).

Mullis said he didn’t have to think long before making a decision.

Falcons fans certainly have reason to be optimistic. Flowery Branch
will return the bulk of the team that went 26-4 last season and won
the Region 7-AAA title for the first time.

"They were like watching a well-oiled machine," Mullis said of the
2007-8 Falcons. "They were fun to watch."

Mullis said he doesn’t have a style that he sticks to exclusively
but will adapt his teams to the talent available.

"I’m not hung up on one offensive or defensive scheme," Mullis
said. "But I do like to run a man-to-man defense and a motion
offense."

Benton, who also recently filled the girls basketball coaching
position for the Falcons, says he’s excited about Mullis and glad
to have the search behind him.

"I’m happy for the kids," Benton said. "We’re all going to miss
Todd [Cottrell]. The kids are going to miss him too. But this is
just another step in the growing and maturing process.

"Our guys are going to continue to succeed."