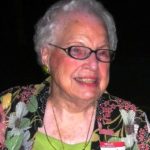 Flo was a member of the First Christian Church of Warrensburg and active member of the Church Women Fellowship (CWF). She was also a member of Local, State and National Retired Teachers’ Association and MU Chapter of Delta Kappa Gamma. She was a life member of Western Missouri Medical Center Auxiliary.

She will especially be missed by her great-nieces, Debbie Ritchie Prior and Cindy Ritchie.

She was also preceded in death by her parents; a sister, Jewell Ritchie; and three nephews, Larry Franklin, Lyndon Ritchie and Randy Ritchie.

Funeral services will be held 11 a.m. Thursday, Nov. 5, at the First Christian Church of Warrensburg, with Pastor Jerry Basye officiating.

The family will receive friends on Thursday morning from 10 a.m. until service time at the Church.

Burial will be in the Sunset Hill Cemetery in Warrensburg.

In lieu of flowers, memorial contributions are suggested to the First Christian Church Building Fund in care of Sweeney-Phillips & Holdren Funeral Home in Warrensburg.

Mrs. Mullis was my high school speech,drama and debate caoch. She influenced me greatly and made me feel that I mattered and was capable of anything. I believe I was able to become a teaher because of the confidence she instilled in me. A beautiful and fantastic person who sent me congratulations on my marriage, birth of my children,and graduation from college,she sent me pictures of my sons for their achievements as they were put in the newspaper and even made phone calls on occassion to congratulate me for my various achievements.

She was not only an inspiration but a role model. I only hope as a teacher that I too can inspire young people as she inspired me.