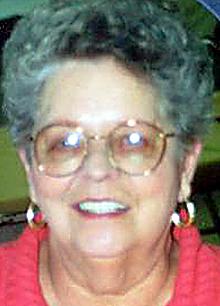 ROBERT LEE Evelyn Marie Mullis Flanagan was born on August 3, 1930, in Brownwood, Texas, to Perry M. Mullis and Velma Mae Champion Mullis.
She died on July 11, 2007 in Robert Lee, Texas. She was married on
October 22, 1949 in Oklahoma City, Oklahoma to R.L. Flanagan of
Comanche, Texas.


She was preceded in death by her husband, R.L. and granddaughter, Alaina Renea Maxcey.


Evelyn served as deputy sheriff/dispatcher at the courthouse in Robert
Lee during the ’60s. She later went to beauty college and had a beauty
shop in her home until about 1987. She was energetic, positive and
enjoyed life while totally devoted to her family. She was always
willing and ready to help those in need. She served as president of the
PTA while her children were in school and was an original member of the
’64 Study Club. Evelyn liked the outdoors and she was a wonderful cook.
There were many dishes that she cooked especially well but was best
known for her homemade biscuits and cornbread. She loved to play bridge
and games in general. She served as a beacon of hope for family and
friends and will be missed by all.


Graveside service will be held at 10:00 a.m. Saturday, July 14,
2007, at the Robert Lee Cemetery. Services are under direction of
Shaffer Funeral Home.


The family would like to extend a special thanks to the wonderful
staff at the Robert Lee Care Center, Cy and Barbara Jenkins and the
special people at VistaCare Hospice all of whom were part of the
excellent care received by our Mother.