Patrons of the Greencastle Post Office have likely noticed something missing during the last week. Sure, all the stamps and packing supplies are still available, but gone is the friendly smile and playful laugh of window clerk Cathy Mullis. 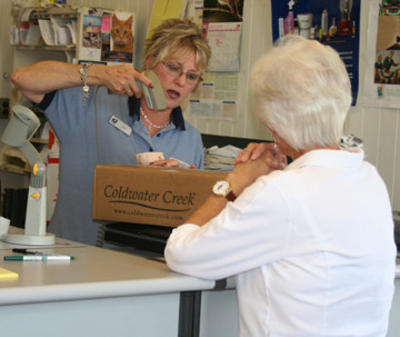 Mullis retired last Friday after 30 years of working in Greencastle’s facility. While there have been a number of women come and go over the years, Mullis has the distinction of breaking the gender barrier at the Greencastle Post Office.

“I guess I pioneered. I was the first lady to have been hired in here. I worked part time 18 years before I became a full-time employee,” Mullis said. “There have been other ladies retire from here, but I am the first one to do 30 years.

“I came in here to an all-male workforce, so that was hard, but I stuck it out,” she added.

The gender of her co-workers isn’t the only change she has seen.

“I’ve seen it from beginning to end,” Mullis said. “We came from a manual unloading of the trucks with no rolling carts, nothing. Everything was in canvas bags and had to be lifted off the truck and drug in. It wasn’t until 15 years after I’d been here until we got rolling carts to roll into the truck, load and roll off.

“Now we have containers. I’ve seen it from the beginning to end. Everything was by hand then.”

Like a good pioneer, Mullis has had to master a number of skills in her three decades with the postal service.

“I’ve carried. I’ve subbed on rural routes. I’ve worked here as a window clerk. I’ve dispatched. I’ve kind of done it all,” she said. “I was kind of a jack of all trades for a little while.”

Her current gig behind as a window clerk has been her chief duty for some time now. The interaction it gives her with the public will leave a void.

“I love this. I’m going to miss the people so much. I’ve worked with the public for 35 or 40 years now. That’s what will be hard,” she said. “I am going to miss my customers and everybody here. We’re a family. We have become a real family — we spit, we spat, just like with your brothers and sisters. But we get over it and we go on.”

It’s not as if she won’t be able to fill the void, though. Like so many working parents, Mullis looks back and sees more time she would like to have spent with her children. Although her kids, son Jamie Adams and daughter Billie Jo Bryant, are grown, she plans to find more time with her family without the job getting in the way.

“They are so, so thrilled for me because this place took so much of my life. They’ve been shoved out of the way for 30 years, and now I want to make up for that,” she said.

“My kids are elated. They grew up as post office babies, and now they have babies of their own, so I am excited,” she continued.

Family time will also have to include her husband Howard, her four grown stepchildren, 10 grandchildren and her mother and mother-in-law.

Mullis won’t just miss her customers, they will also miss her. Throughout the day, patrons came in congratulating her, saying she would be sorely missed.

“I had a customer come in today and say they were going to lower the flag to half-mast,” Mullis said.

While taking it easy after retirement was definitely on the agenda, Mullis said she would find some other things to occupy her time.

“I think my kids have plans for me to baby sit, of course. Everybody’s pretty well in the area,” she said. “I actually have an embroidery machine, which I acquired a year or so ago, and I really want to focus on that and start doing a little bit of business with that — logos, T shirts, hats. I love to sew.”

In the end, Mullis plans to approach retirement just like work — take whatever it throws at her.

“I’ll make the best of whatever it is,” she said.

Cathy Mullis serves a customer last Friday at the Greencastle Post Office. It was Mullis’ last day working for USPS after 30 years of service.