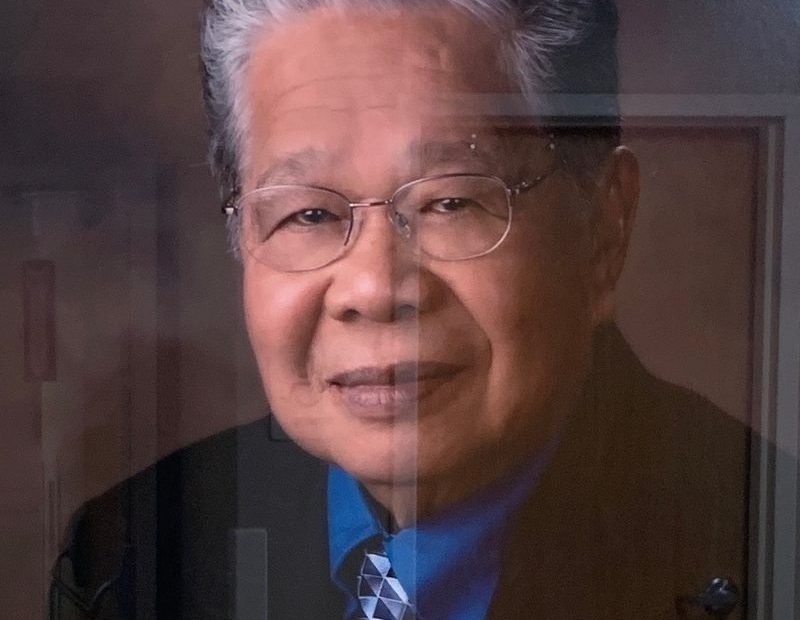 MILD MANNERED AND KIND HEARTED COMMITTED TO HIS PATIENTS Remembrances of Dr. Valentino Sombiro Simpao, MD GREENVILLE –
Valentino Sombiro Simpao, age 88, passed away peacefully in Louisville, Kentucky on Wednesday, September 11, 2019, surrounded by loving family and friends.
He was born in New Lucena, Santa Barbara, Iloilo, Philippines on November 13, 1930, to a devout Catholic family of industrious farmers and municipal leaders. With the advent of WWII, he was forced to halt his studies and hide from Japanese invaders in the mountainous jungle with his family of five; his oldest brother Andres was an Alamo Scout Commando with American forces against the enemy.
Afterwards he resumed study (to include ROTC during high school) and went on to complete Medical School (Class of 1957) at the University of Santo Tomas in Manila, remaining an active alumnus until his death, as well as a member of the FilAm Medical Society.
Upon graduation Dr. Simpao worked as a young private practitioner in the barrio of Santa Barbara: treating equally without regard to “ability to pay”.
Subsequently he came to Niagara Falls, New York for a post-residency internship, arriving by plane on July 4th, 1958 by way of Alaska. He fell in love with the United States and its people; marrying Diane Felice Villone, LPN in Niagara Falls in 1959, with whom he had nine children (five living; four deceased).
Dr. Simpao, an internal and pulmonary medicine specialist, subsequently accepted a position at Mount View; the New York State Tuberculosis Hospital in Lockport and became a United States Citizen. He moved his family to Paris, Kentucky in 1966; acting as the Medical Director of the State TB Hospital there in Paris. In 1970 he opened his first private practice in Calhoun, Kentucky. A year later in August 1971 he moved to Greenville, Kentucky, opening another private practice in Central City, Kentucky where he remained until retirement in March 2008.
During his fifty-one-year medical career, he received many accolades (e.g., Chairman Kentucky Black Lung Association, Kentucky Medical Association, American Medical Association, etc.) and was the founder of the Coalminers’ Black Lung Clinic in Muhlenberg County. A true old-fashioned physician, Dr. Simpao carried the quintessential black bag, made house calls, delivered babies and treated an extremely wide array of patients from all walks of life (often foregoing payment from patients with hard-pressed finance).
A devout Catholic, he was an active member of St. Joseph’s Parish in Central City from 1971 till his passing; a Lay Associate of the Ursulines at Mt. St. Joseph; a Third-degree Knight of Columbus and recently received the Catholic Sophia Award 2019 from the Catholic Archdiocese of Owensboro, Kentucky.
He had an infectious sense of humor; loved to laugh and was eternally in search of “something different.” A world-traveler, Doc prized education and hard work. He personally never stopped learning; participating in numerous professional and religious conferences and seminars, always encouraging those around him to pursue mastery in the chosen fields.
He was an avid bowler, tennis player and golfer; being a member of the Greenville Country Club from 1971 and having played golf all over the world. He also enjoyed a good game of Tonk with friends, sports and luxury vehicles, and was recognizable for his full head of hair, spiffy fashion sense, vast array of hats, ties, and shoes, and general love of “getting deals.”
Known to stand nervously in front of the television when his favorite team was playing, Doc enjoyed all sports (he also enjoyed walking and strength training, till near his passing). He loved “Da” UK Cats’ and “New York Giants”; he was always the chief culprit whenever the sports section of the newspaper could not be found.
Having achieved his version of the American Dream, he was an extremely generous man and sought to help many with whom he crossed paths. Undoubtedly a pillar of his family in the United States and the Philippines, he continued to share what he accomplished until his death. Eternally curious, Doc was open to trying new foods, voyaging to new places, and in general wanted to soak in the richness of life and voraciously see and experience all the world had to offer; always with family by his side.
He is preceded in death by his mother, Purificacion, father Gorgonio, his sister Felicidad, his brothers Isaac and Andres, three of his sons: Joseph, Bashful and Jesus, and one of his daughters, Mary.
Survivors include: the Mother of his children Diane; sons Tony and Phillip (Rose); daughters Holly Strelzik (Jonathon), Terri Paige (Carl) and Frances Crawford (Darby); grandchildren: Jason, Emily, Lilyana, Natalina, Joseph, Grace, Gabriel, Marcellino Paige; Diana, Daphne, Lucy Crawford; Michael (Isabella), Shay Strelzik; great-granddaughter Callista Cassilly, great-grandson Avi Strelzik; as well as many loving friends and relatives in the United States and Philippines.
Funeral services will be Monday, September 16, 2019, at 11:00AM at St. Joseph Catholic Church in Central City, with Father Josh McCarty officiating.
Graveside services will be Monday at 3:00PM at Resurrection Catholic Cemetery in Owensboro with burial to follow.
Visitation will be Sunday from 2-7PM at the church. Prayers will be Sunday at 6:00PM at the church. In lieu of flowers, expressions of sympathy can be made to Saint Joseph Catholic Church in Central City, Kentucky.
Tucker Funeral Home is in charge of arrangements. Online condolences may be made at www.tuckerfuneralhomes.com. May Doc rest in Jesus.
To Plant Memorial Trees in memory, please visit our Sympathy Store.
Published in Legacy on Sep. 11, 2019.
Tags:Villone