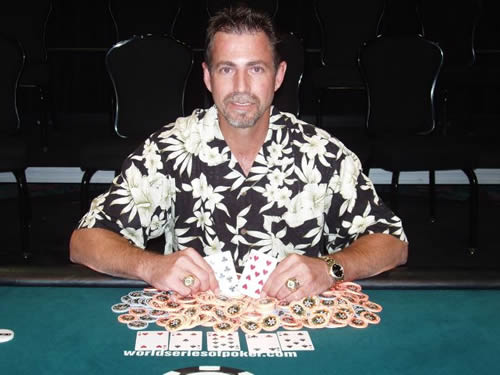 Don "Final Table" Mullis is a new car dealer from
Mooresville, NC. In his ten-month poker career, he has made 9 WSOP Circuit
final tables and 2 final tables at the Ultimate Poker Challenge. Tops
among these was his gold championship ring in the Lake Tahoe WSOP Circuit.
He started the final table here in Tunica with $155,000 in chips.

The largest first prize of the Circuit so far was up for
grabs today, worth more than $100,000, was given out today at Grand Casino
Tunica for Event #8, the $1000+60 No-Limit Hold’em tournament. 323 players
signed up yesterday for a shot at the most lucrative prize pool yet, and they
played down to the final fifteen before leaving at 2 AM today. Twelve hours
later they reconvened to decide the winner, and within 30 minutes the final
table was set. Two of the ten players were looking to claim a second WSOP
Circuit gold championship ring. In order of seating, here are the final ten: