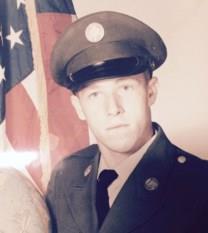 Darrel E. Mullis, Sr. died unexpectedly in his home in Bloomington on October 9, 2016.

He was the son of the late Clarence Mullis and Juanita(Ferran)Huffman, born in Bloomington on October 18, 1945.

Darrel was a clerk at Opportunity House in Bloomington for 20 years. He enjoyed helping those in need. He was honorably discharged from the United States Army after serving in Vietnam.

Darrel loved and enjoyed being with his family.

Darrel was preceded in death by an infant brother Marvin Ray Mullis, his parents and one nephew Kevin Thacker.

A graveside service for Darrel will be held in Mt. Gilead Cemetery on Thursday, October 20, 2016 at 2 p.m. Military Honors will be performed by the Monroe County Honor Guard and the US Army. Day & Deremiah-Frye Funeral Home 4150 E. Third St., Bloomington, IN 47401 is in charge of arrangements.