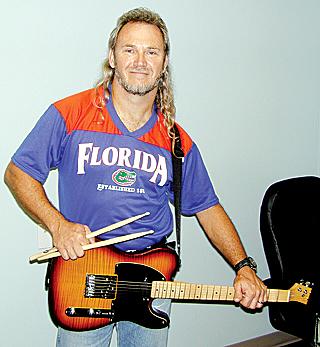 Mike Mullis, co-writer of the original Gator Chomp song, has revised the lyrics to include Tim Tebow and Urban Meyer. He is offering three versions — radio edit, dance mix and extended version — on a new CD that is available by mail.

Mullis debuted the new version on Saturday during the Gator Chomp Romp at the Spirit of the Suwannee Music Park.

“It went really well,” Mullis said of the Gator Chomp Romp. “We camped out and everybody was cooking. Seven different bands showed up and there were fireworks afterwards. We tried to make it really entertaining and look forward to doing it next year.”

Mullis played with his band WhooWhee at the Romp, and said they have a couple of dates coming up. There also was a YouTube “Are You ready for the Gators?,” which will be online this week.

Mullis has begun a Gator Chomp Statewide Radio Tour of stations to promote the CD.

“We kicked it off Monday at Power Country and I was at the ‘X’ today,” Mullis said. “We will hit Gainesville next week and Jacksonville the week after. We will go right on down the state and it will run to the end of the year.”

Gator Chomp CDs, MP3s and ringtones can be ordered at dothegatorchomp.com. Autograph requests can be sent with the money order and Mullis will accommodate.

“We are one big family in the Gator Nation, so I am trying to make it more personal,” Mullis said.

Mullis said he is sharing a portion of the proceeds with Haven Hospice, March of Dimes, American Cancer Society, Guardian Ad Litem and Pet Rescue.

“It is my way of trying to help bring awareness,” Mullis said. “These are great organizations and they are doing great services.”