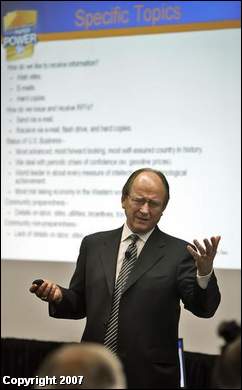 When
Wal-Mart or a big aerospace company or a major auto parts supplier
starts a site search for its next store, factory or headquarters,
Mullis is the well-paid consultant behind the scenes, advising clients
where the new jobs should go.
Mullis, president of J.M. Mullis Inc.,
of Memphis, and a staff of 14 act as hired hands to some of the world’s
biggest employers.

Mullis is on the road 300 days a year, visiting
potential sites from Shelbyville to Singapore, dangling projects worth
hundreds of millions of dollars in front of economic development pros.

He
made a stopover at the state’s 54th annual Governor’s Conference on
Economic and Community Development last week, and he came bearing sound
advice on how to land new jobs.

Job growth is likely to come from a variety of
industries over the next decade, he said, among them food processing,
distribution centers, aerospace projects and technical support centers
that handle back-office chores for insurers, lenders and others.
The good news is that Tennessee has many positive attributes. Here are some of the pluses:

Corporations
enjoy being in a region that’s growing. It means new job applicants
arrive daily as more people move here from other states. That helps
offset a tight labor market.

One blemish is education, Mullis said.

“When we visit a site, you’ll see our team in classrooms; we’re watching for discipline and educational standards,” he said.

Too many Tennessee communities have weak public schools, and failing to improve could cost the state jobs.

“Our public education system is not there, and it hasn’t been for some time,” Mullis said.

Not all site selections drag on for years. Some are
wrapped up in two or three months, Mullis said, and companies expect
communities to be ready with detailed lists of available industrial or
office sites.

Initial searches are often done by computer and
phone. Five or 10 cities might get site visits, and then a city “only
gets one chance,” Mullis said.

Incentives are important, too,
and it’s a high-stakes game. Tennessee may have to compete against
India, Spain or Malaysia, not just neighboring Alabama.

Mullis
said one aerospace project worth $400 million landed this deal in
Malaysia recently: a $100 million government loan with low or no
interest, a $100 million grant and a 4-cents-per-square-foot lease for
10 years.

One thing that could help Tennessee compete is a
stronger “deal closing” fund — cash that can be awarded to help with
land acquisition or other startup costs, Mullis said. Some states,
oil-rich New Mexico for instance, even take equity positions in
projects. Flexibility wins in the end, the site consultant said. And
that means jobs.