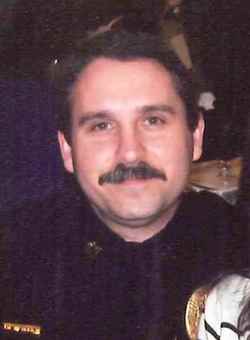 Captain Christopher Mark Allen, 51, a resident of 2611 Red Pine Rd., died peacefully Sunday morning at his home with his wife and children by his side. Captain Allen was born in Greenville, SC, son of the late Barbara Rogers Mullis and Bobby C. Allen, Sr. who survives. He retired August 1st, 2011, from the Durham Police Department, where he had worked for 30 years. Captain Allen was a member of Duke Memorial United Methodist Church.

A Memorial Service will be conducted Wednesday at 4:00 p.m. at Duke Memorial United Methodist Church by a long time family friend Rev. Lisa Cole. The family will receive friends at the church one hour prior to the Memorial Service.

Flowers are acceptable or memorial contributions to the Juvenile Diabetes Research Foundation of the Triangle, 7721 Six Forks Road, #136 Raleigh, NC 27615.

Clements Funeral Service in Durham is assisting the family.